Droid Void (たたかえ！ クラッシュローダー lit. Fight! Crash Loader in Japanese) is the seventeenth level in the game and the second level of the fourth warp room of Crash Bandicoot: The Wrath of Cortex. In this level, Crash must make his way through a space station filled with electrified grates, lasers, and robots. About halfway through, Crash finds a mech suit and climbs in, with the remainder of the level being played inside the suit. This level also contains a Bonus Round and the game's only Purple Gem route, the latter of which is played inside the mech suit. 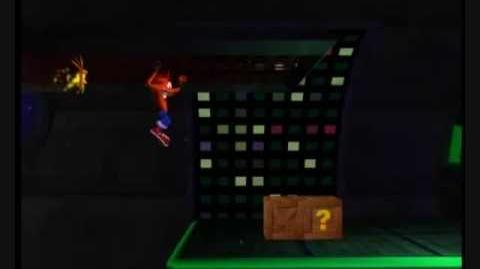 Crash Bandicoot The Wrath Of Cortex - 106% & All Platinums, Part 16 Droid Void-0
Add a photo to this gallery

Expansion required
This article is too short to provide more than rudimentary information about the subject. You can help the Crash Bandicoot Wiki by expanding it.
Retrieved from "https://crashbandicoot.fandom.com/wiki/Droid_Void?oldid=193680"
Community content is available under CC-BY-SA unless otherwise noted.