Bandipedia
Register
Don't have an account?
Sign In
Advertisement
in: Crash Bandicoot: The Wrath of Cortex, Boss Fights
English

The Gauntlet
Drain Damage is the 2nd boss level in Crash Bandicoot: The Wrath of Cortex. After Crash has collected all of the Crystals from the water hub of Coco's VR Hub System, he will face Crunch as well as the Water Elemental, Wa-Wa. The fight takes place nearby a drainage system of sorts, along with stone pillars and platforms that will sink if Crash stays on them for too long, and the background being an Asiatic forest. If Crash defeats Crunch and Wa-Wa, then the reward for his victory will be the Double Jump ability, allowing him to jump more than once. This battle is slightly easier with the Double Jump.

The battle starts after Crunch and Wa-Wa leap over to the second platform. However, Crash cannot just simply leap across the stones and spin onto Crunch, he has to have perfect timing or he will be vaporized by the greenish-blue wave. Regardless of Aku-Aku being acquired by Crash, Crash will vaporize instantly if the waves hit him. Also, the second thing that is lethal to Crash is the water, as there isn't any solid ground besides the platforms to land on. Crash cannot stay on one platform forever, as they will sink if stays on one for too long. All Crash has to do is to wait for the right timing, jumping over the wave across the platforms and spin onto Crunch.

In addition to the ground-sweeping waves, Crunch can now launch waves in the air, meaning that Crash must not jump too soon or he will be vaporized by the airborne waves. To dodge them, all Crash has to do is crouch down. The pattern in this phase is low wave first, then high wave second. Along with dodging these attacks, all Crash has to do is merely jump across the platforms and spin onto Crunch again at the end.

Now Crunch has a new ability in this round; he can now pound his fists on the ground, sending shock waves onto the three platforms. If Crash moves a muscle at the wrong time, he will vaporize as per usual. The attack pattern of the waves is the same with the addition to the shock waves at the end, therefore Crash must jump at the right time, dodge, and stand still, then he can again spin onto Crunch again.

This is the last phase of the battle. Fortunately for Crash, Crunch does not gain any new attacks in this part, but now Crunch changes his tactics around. First, he will launch the low-proximity wave and hit the ground and then fire the high-proximity wave and hit the ground. So Crash has to jump over, stand still, crouch down, and stand still in that order. After Crash spins onto Crunch for the final time, Crunch will vanish into bubbles and Wa-Wa will be imprisoned again, and the duo leave nothing else besides the Double Jump. Crash then grabs it and leaves the area. On a side note, if Crash does not immediately collect the Double Jump, he is free to explore the area before he vanishes, as there is nothing else dangerous during this time except the water surrounding the platforms. 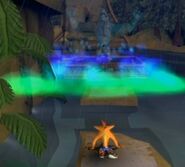