Dragon Mines is the tenth race course in Crash Team Racing and Crash Team Racing Nitro-Fueled. It is raced on in the blue Gem Cup (as well as Sewer Speedway, Tiger Temple and N. Gin Labs) and the purple (with Roo's Tubes, Papu's Pyramid and Hot Air Skyway) Gem Cup.

It is Komodo Joe's home track, being the track he races against the player on in his boss race. In Adventure Mode, the course is located in Glacier Park.

The track takes place deep underground within the Komodo Brothers' gold mines. Minecarts roll around in several places, and an underground pool can be found in one cavern. In Nitro-Fueled, the pool is home to the hoard of a massive fire-breathing Dragon.

The track begins with an immediate downhill plunge before turning to the right, then curving to the left in the room containing the underground lake. The track continues with another curve to the left, intersecting with the track of a minecart. Players can go off road and follow this minecart track for a significant shortcut.

Back on the standard route, racers are faced with a clockwise upwards spiral, requiring U-turning to take smoothly. After is a brief straight section with another minecart hazard and a boost pad as the track angles to the right, sloping uphill. The track then curves to the left, returning to the finish line. Alternatively, racers can cut across the rough ground on the left for a small shortcut. 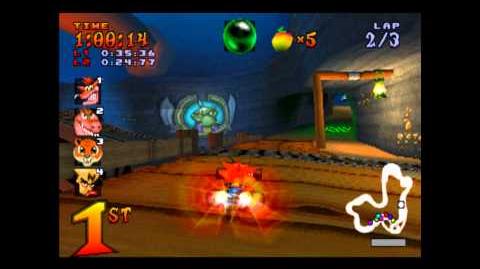 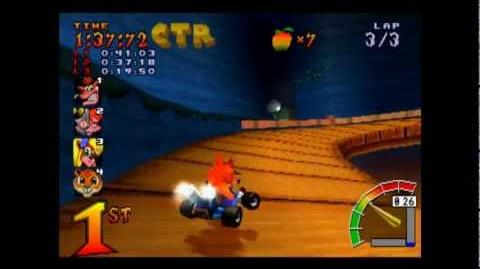 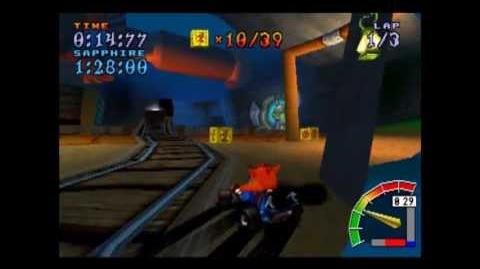 Cortex, Komodo Joe, Tiny, and Polar racing through the track