Bandipedia
Register
Don't have an account?
Sign In
Advertisement
in: Crash: Mind Over Mutant, Machines, Crash of the Titans,
and 3 more

The Doominator is a massive robot with the primary purpose of destroying Wumpa Island in Crash of the Titans. Dr. Neo Cortex's plan was to build the robot and destroy Wumpa Island himself, but Uka Uka replaced him in favor of his niece, Nina Cortex, who promptly took control of the plan. She had brainwashed the kidnapped Coco Bandicoot, and forced her to speed up the construction of the Doominator. Towards the end, Crash had arrived just before the robot was sent on its mission, and he proceeded to fight Nina in the Doominator's control room, as the Doominator made its way toward Wumpa Island. Upon Nina's defeat, the mind-control device was removed from Coco, who quickly disabled the robot's computers. The shut down Doominator then collapsed, landing on the shore of Wumpa Island, right by the Bandicoots' house. Coco would later attempt to turn one of the fallen Doominator's eyes into a high-powered television system for entertainment.

The Doominator is mentioned in Crash Bandicoot: On the Run! The Alpha and Beta Parts are salvaged from its remains. 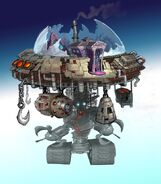 Concept Art of the unfinished bot.

Crash of the Titans
Crash: Mind Over Mutant
Community content is available under CC-BY-SA unless otherwise noted.
Advertisement