Bandipedia
Register
Don't have an account?
Sign In
Advertisement
in: Crash Bandicoot 4: It's About Time, Levels, Chase Levels,
and 2 more

Dino Dash is the third and final story level of Eggipus Dimension and the twenty-third main level of Crash Bandicoot 4: It's About Time. The fourth and final Quantum Mask Ika-Ika is found after completing this level.

Crash/Coco are still in the prehistoric jungle, and they must make their way to Ika-Ika while occassionally being chased by a savage T-Rex.

Eventually, Crash, Coco and Cortex find Ika-Ika sleeping within a dinosaur egg. Lani-Loli wakes him up and tells him about the multiverse crisis. The melancholic side of Ika-Ika has little to no faith of all humanity, while his positive side is more bright on events that are occurring at the moment. The team recruits Ika-Ika and have found all 4 Quantum Masks needed to avert the crisis. They then proceed to stop N. Tropy by heading off to another dimensional rift.

Promo image of Crash getting chased by a T-Rex.

Promo image of Crash in his Marsupus Erectus skin. 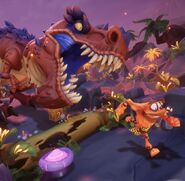 Promo image of Crash in his Marsupus Erectus skin.