His flamethrower destroys more than it intends to.

Dingodile's battle (ディンゴダイル とうじょう lit. Dingodile Appears in Japanese) starts with a cutscene of Dingodile threatening a penguin with his flamethrower, when Crash arrives, Dingodile will spare the penguin, turn to the bandicoot and say "Break out the butter, I'm gonna make toast!" and then the fight starts. Dingodile will shoot the ceiling making an icicle barrier fall around him. he will then launch eight fireballs into the sky that will rain down and attempt to BBQ Crash, after words Dingodile will attempt to shoot Crash with his flamethrower by launching flames at him, but will break the icicles in the process. When enough icicles are broken, Crash can spin him, but he will have to run because the massive explosion can hurt him, after words, he will launch a flamethrower at the ceiling making an icicle barrier fall around him. the second fight will be the same, so this this strategy again, but on the final hit, he will be launching two fire balls in a row. Repeat this strategy more last time and he will be defeated; afterwards, Dingodile will calmly say, "Ya thrashed me mate. No worries, but you'll soon be up against much worse..." to Crash, after words the penguin that appeared early will come out and bounce on Dingodile like a trampoline. 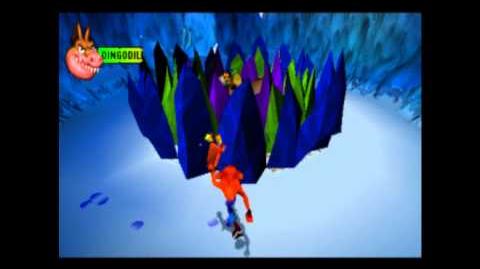 Dingodile (すきを ねらえ！ lit. Aim When Offguard! in Japanese) is the first boss of the game. He will have a force field around him and a gun shooting torpedoes in the air to make stalagmites fall from the ceiling. Sharks will also come out of caves making it a bit harder. the only way to disable Dingodile's force field is to have one of the stalagmites fall on him, when Dingodile's shield disappears, Crash can spin him. Repeat this two more times and he will be defeated. 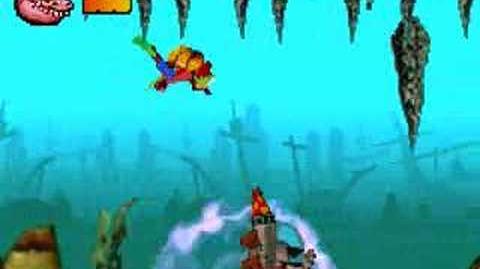 After being secretly followed to the Academy of Evil by the treasure-seeking Dingodile, Crash and Cortex encounter him in the boiler room. Cortex is absent for this boss fight after being sent flying by Dingodile, so Crash alone must defeat this boss.

Dingodile stands in the middle of a large platform, surrounded by fire coming from the ground which hurts Crash upon touching it, protecting Dingodile from attack.

Dingodile begins doing several attack patterns with his flame thrower, which Crash must dodge. After the attack pattern finishes, Dingodile will charge up a strong blast, which Crash must trick Dingodile into firing at a valve. The valve will open, revealing a large button which you need to body-slam. This activates sprinklers above Dingodile, putting out the flames around him and leaving him vulnerable to attack.

Dingodile has 4 attack patterns, one for each hit point. The first consists of him shooting fireballs upwards, which will fall to the ground and explode with a very small radius.

The third pattern is similar to the second, but Dingodile will slowly follow your movements rather than going in circles. Instead of the higher stream, Dingodile will spray a massive wall of fire that can't be slid under or jumped over, but is slow enough to outrun.

In the fourth and final pattern, Dingodile will spray a anti-clockwise stream again, but this time he'll alternate between spraying along the ground or higher up, making it harder to tell whether you should slide or jump. He'll then do the wall of fire attack again, anti-clockwise this time. He'll finish off the attack pattern by doing the fireball attack again.

When Dingodile is defeated, a cutscene will start and he'll collapse next to the circle he'd been standing on the entire fight. Crash walks over and looks down at him, standing on the circle. The circle then suddenly rises up, revealing that it was a hovering platform the whole time. Crash is carried out of the room, ending the level. 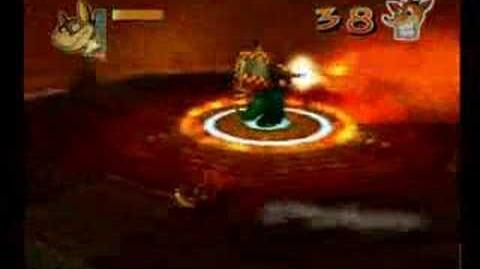 Dingodile is the first boss and he has nine hit points. Dingodile will attack Crash by using his Flamethrower and will try to punch and kick Crash if he gets too close. Crash can easily defeat him by throwing oil barrels and bee hives at him or just punch/kick him until he is defeated. 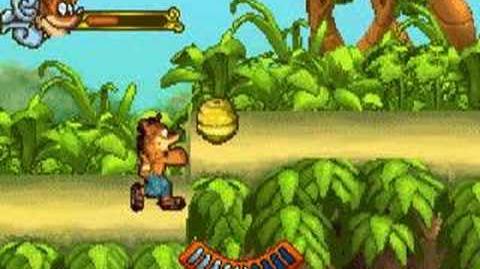 Crash of the Titans (DS version)

Dingodile once again appears as a boss in the Nintendo DS version of Crash of the Titans. In his boss battle, he has three arenas, and he has three health in all each one. So altogether he has nine health. His battle starts out with him trying to shoot Crash with his water gun. After a few shots he crouches down, and spins his water gun around to try and harm Crash. Crash needs to jump to avoid his blasts. After a few seconds Dingodile calls in Whalephants to assist him. Crash must defeat one of the whalephants, then hijack it. Once he has hijacked a whalephant he now needs to go closer to Dingodile and shoot him with the whalephant's powerful blow hole attack to harm him. This takes one health on Dingodile. Once Crash has hit Dingodile three times with the whalephant, Dingodile will run away to a different arena. Once here Dingodile will start spinning his water gun to try and harm Crash once again, but Crash is still on the whalephant he has hijacked earlier, so there is no point to defeat another one. Once Crash is close to Dingodile shoot him three times again. Now Dingodile will run away to the backside of his arena, and three tall platforms will rise under him. Dingodile will then run to the last arena where he waits for you. Now Crash will have to go to the tall platforms while avoiding the enemy whalephants. Once at the platforms Crash most jump off his whalephant to get on the first platform. Once here Crash has to jump to the next two platforms. At the last platform Crash needs to jump onto the ledge, and off the ledge into the next, and final, arena. Dingodile will once again spin his water gun around to try and harm Crash. Crash will have to hijack a whalephant, and, once again, hit Dingodile three times.

Now all of his health will be depleted, and Dingodile will growl, then disappear.

Dingodile's boss fight from the original third game reappears in the N. Sane Trilogy with a few minor differences. These are that Dingodile's fireballs that he shoots don't have an after affect when shot like they did in the original game, and they just disappear right away. Also instead of having a radius, his fireballs only harm Crash in the exact area they hit. Also Dingodile seems to shoot his flamethrower much faster, therefore breaking and regenerating his ice shield at a much faster rate.