Dingo Canyon is the eighth race course featured in Crash Team Racing and Crash Team Racing Nitro-Fueled. This is Dingodile's home track. The Yellow Gem Cup is the home of this stage, along with Tiny Arena, Hot Air Skyway, and Oxide Station. In Arcade mode, this track is in the Crystal Cup, along with Roo's Tubes, Dragon Mines, and Sewer Speedway. Nitro-Fueled also places this track as part of the Desert Cup.

This track goes for a rugged outback look and theme, intending to represent an Australian-like environment. Its cacti and rock formations make it more closely resemble an American desert, however. It contains little ponds, tall, rocky cliffs, and cacti which dot the landscape. Due to the fact that there is an actual marked road, it may be possible that the track is also based on the motorcycle-themed levels from Crash Bandicoot: Warped. The structure and design of this track directly reflect the battle arena, Rocky Road.

The track begins with a small bump before curving around to the right, with an armadillo rolling back and forth across the road at the end of the curve. Alternatively, racers can take a sharp right turn to cut across the sand for a small shortcut. Next is a long downhill descent, lowering racers down into a partially flooded section of road at the bottom of a deep valley. At the end of the valley is an upwards zig-zag with a boost pad in the middle, going right, then left, then right again before emerging from the valley completely.

After exiting is a brief straight section with two more rolling armadillos before the road forks around a rock formation. The road goes uphill as it gently turns to the right before peaking in a cliff, sending racer jumping down to the finish line below. One final armadillo rolls back and forth just before the finish line. 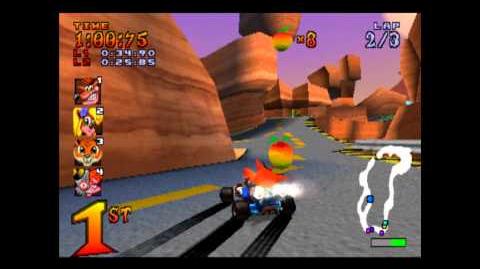 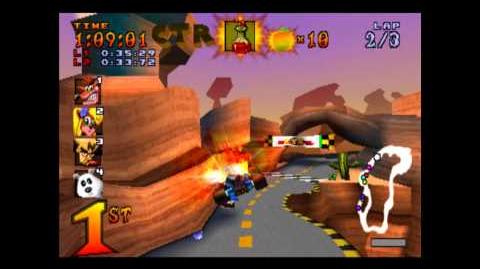 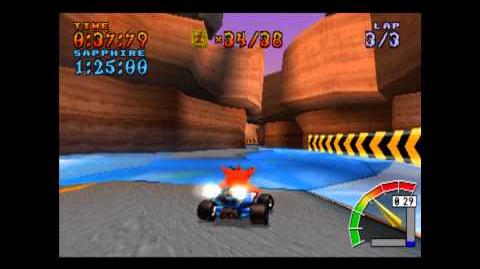 A multiplayer race in Dingo Canyon.

Orange Asphalt seen outside the track