Detonator Crates are types of crates that first appeared in Crash Twinsanity. When the crate is spun or jumped on it blows up nearby explosive crates. If spun, the handle will spin around and until it hits the bottom. Jumping on the detonator is a quicker method of blowing up the nearby explosives. This crate is exclusive to Crash Twinsanity and the handheld versions of Crash of the Titans. If Crash is next to this crate and spins it, the handle might knock him off of a ledge.

A detonator crate from the GBA version of Crash of the Titans.

A detonator crate from Crash Twinsanity. 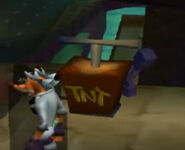 A detonator Crate in Crash: Tag Team Racing.
Add a photo to this gallery

Retrieved from "https://crashbandicoot.fandom.com/wiki/Detonator_Crate?oldid=192912"
Community content is available under CC-BY-SA unless otherwise noted.