Deep Sea Driving is the sixth race course that appears in Crash Nitro Kart, as well as a remade version in Crash Team Racing Nitro-Fueled.

The track is part of the Barin world and takes place in an underwater tube and cave. This track is the course used when racing against Nash, Barin's champion. This also includes the zero gravity mechanic, and is also the last track to race on in Barin before racing against the boss fight.

Since the track is used for his boss race, Deep Sea Driving is considered Nash's home track. It is a course in the Uka Cup and the Green Gem Cup (along with Jungle Boogie and Out of Time).

The track starts off in a cave with a set of item crates. The racers will then come across a turbo pad that will take them into an underwater tube. They will be able to view many unique underwater creatures while racing in the tube. The underwater tube will branch off into two different paths that will eventually converge into one path. The racers will then encounter a giant rotating pendulum that will that cause them to spin out if they touch it. They will then enter the cave again and use a turbo pad to go over a few pits. After that, they will come upon a normal path and around a stone structure protruding from the ground. The final part of the track takes place in another underwater tube. This time, the characters are able to drive around the whole tube and are not bounded by walls. Along the way, they will encounter giant rotating fans. If they touch one of the fans, then their kart will spin out. After they finish the underwater tube, they will enter the cave again and come across the finish line.

The characters will race Nash on this track once they collect all three trophies in the Barin world of adventure mode. The track will remain virtually the same, but the rotating pendulum and fans will be turned off. However, the player will still spin out if they touch the blades on any of these obstacles. Also during the race, some of the regular item boxes are replaced by X Crates during this race. While racing Nash, he will dispense miniature jaws from his kart that will cause the player to spin out if they touch one of them. If the player wins the race, then they will gain the key that will grant them access to the next world, Fenomena. 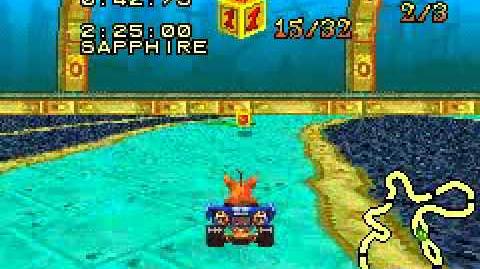 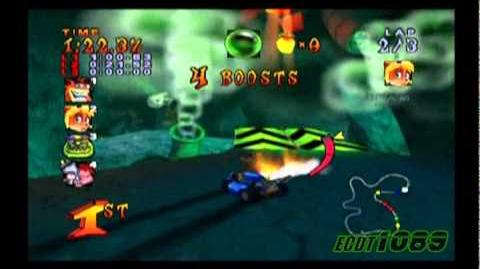 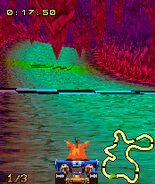 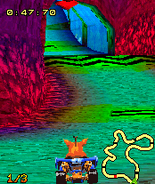 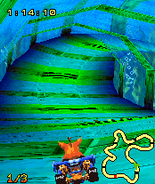 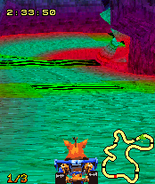 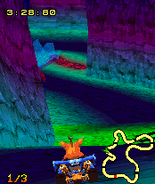 The new section in Nitro-Fueled, including the sea monster.

Komodo Joe in the cave portion.

Joe speeding through a tube area.