The Deathbot is a robot which belongs to the Evil Twins. It serves as the final boss in Crash Twinsanity and has three phases.

The player plays as Nina in the first phase. She must climb and destroy six batteries which power the Deathbot. The Deathbot produces Ant Drones, swipes with it's claws and sprays fire if the player gets too close to it.

The player takes control of Cortex in the second phase. The player must destroy the Deathbot's machine gun and laser cannon by shooting them.

The player takes control of Crash piloting Mecha-Bandicoot in the third and final phase. There is a barrier circling the Deathbot with small gaps in it. Crash must use Mechabandicoot's missiles to hit the Deathbot through the small gaps. After all health is depleted, he saws the deathbot in half with Mechabandicoot's chainsaw arm. 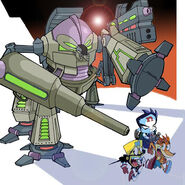 Concept art for the boss fight.

Concept art featuring an early design for the Deathbot.
Add a photo to this gallery

Retrieved from "https://crashbandicoot.fandom.com/wiki/Deathbot?oldid=194362"
Community content is available under CC-BY-SA unless otherwise noted.