Start a Wiki
watch 02:27
The Loop (Games)
Do you like this video?
Move suggested
It has been suggested that this article should be moved to a different title.

Dansu! De Jump! Na Daibouken (Dansu！デ·ジャンプ！ナ大冒険) (lit. Dance! Then Jump! It's a great adventure) is a manga series developed by Coro Coro Comics, and was drawn and produced by Kawashima Ari from December 1997 to Febuary 1999. Only two manga volumes were published to date before its cancellation.

The manga is loosely based off the events of Crash Bandicoot 2: Cortex Strikes Back. Cortex tricked Crash into thinking he has changed his ways in order for him to gather the crystals for an elaborate plot to take over the world. Crash teams up Aku Aku and the adventure begins, Crash encounters a large variety of characters from Coco Bandicoot (whom he normally lives with) and Penta Penguin, to enemies from his past including: Dr. N. Gin, Ripper Roo, and even the Komodo Bros. The story itself focuses on comedy rather than action alone, getting Crash into hilarious situations involving the setting around him.

Differences between the manga and game 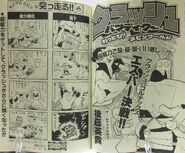 Retrieved from "https://crashbandicoot.fandom.com/wiki/Dansu!_De_Jump!_Na_Daibouken?oldid=187187"
Community content is available under CC-BY-SA unless otherwise noted.