Bandipedia
Register
Don't have an account?
Sign In
Advertisement
in: Crash Bandicoot: The Wrath of Cortex, Boss Fights
English

Avalanche
Crashes to Ashes is the 3rd boss level in Crash Bandicoot: The Wrath of Cortex. If Crash has collected all of the Crystals from the fire hub of Coco's VR Hub System, then he will be allowed to take on Crunch as well as the Fire Elemental, Py-Ro. The arena seems to be placed inside a volcano and there is a long path over a bridge, as well. If Crash defeats Crunch and Py-Ro for the first time, then he will gain the ability to spin for a few seconds longer than he normally could.

For the first round (and the next two after this), there is no way to attack Crunch head-on because if Crash tries it, he will burn to smoldering ash as there is a wall of flame protecting Crunch from frontal assault and it is impossible to go behind Crunch without being deep-fried, either, so the only thing Crash has to do is just run forward and with no looking back or stopping. In this first phase, Crunch will attempt to not only smolder Crash with his flame wall, but throw hot rocks at Crash. After Crash walks away further, there is a mechanical suit waiting for him, forcing Crash to counterattack with a water gun. Of course, Crash must attack him before he can go back to the beginning, so Py-Ro can reignite the wall of fire that shields Crunch. After Crash douses the fiery bandicoot, Py-Ro will reignite the wall of flame.

In the second phase, Crunch has no new initial moves, but Crunch now has a new attack to try to throw off Crash from getting to him: putting rocks of fire in Crash's way and when it hits Crash, the mech will be destroyed. Again, all Crash has to do is run, avoid the boulders and look for the landmines underfoot.

In the final phase, Crunch's new attack is that the boulder he throws while chasing Crash can also split into two halves and to make matters worse, the path is longer than the second time around and again, there are landmines that try to destroy the mech before Crash can douse Crunch. After finishing him off, Crunch's hot body is destroyed and Py-Ro is condemned to hibernation once again, as was Wa-Wa and Rok-Ko before him. The duo leave nothing but the Death Tornado power-up behind, which can extend Crash's spinning time and allow him to glide over distances. 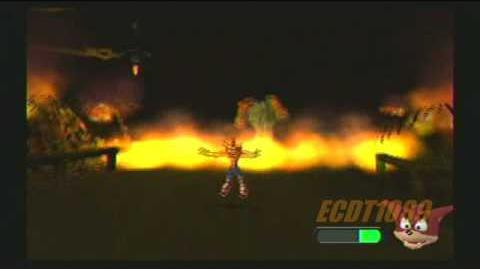