Crash of the Titans (mobile)

Crash of the Titans (mobile)

Crash of the Titans is a 2D side-scroller beat 'em up game released on October 2007 and developed by DeValley. It is one of the three portable versions of Crash of the Titans, along with the Nintendo DS and Game Boy Advance versions.

The game starts with Crash sleeping on a hammock in front of his house, when suddenly Aku Aku gets in contact with him through his telepathic powers: Aku Aku says that Cortex is using the powers of the four Tiki Masks of the Wumpa Islands to transform all the animals into monsters. The doctor also kidnapped him to harvest his mojo powers.

Crash now has to collect the four Tiki Masks and free Aku Aku to get everything back to normal and change back the monsters into animals.

The game is a side-scrolling beat 'em up, very reminiscent of classic arcade beat 'em ups. The player can control Crash who can punch, kick, dodge attacks, slide with a surf board and, of course, spin. Like any other version of the game, the main gimmick is the jack ability: Crash can take control of any enemy while they are dizzy. Unlike other versions of the game, when an enemy is controlled a meter appears on the screen, the meter constantly depletes and if it runs out completely the player gets projected backward. The meter can be refilled by defeating other enemies.

Wumpa Fruits make an appearance in the game, but this time acting as currency: Crash can buy upgrades for his attacks in a shop in exchange for Wumpa Fruits.

There is no jump button in the game, instead Crash will automatically leap across holes.

Colored blocks are sometimes found obstructing the way, and can only be destroyed by specific enemies.

All the enemies in the game can be controlled, another difference with the main version fo the game, that only let the player control bigger enemies and not smaller-sized enemies (known as minions).

The entire adventure is set on Wumpa Island. Crash must make his way though five different worlds. At the end of every stage, players are given a rank based on their performance that is then translated into mojo points.

Some levels are set in the ocean: in this levels Crash must surf on the water to get to the other side of the sea, while a giant wave is chasing him. The wave can be used to gain speed but if players are not careful enough they could get caught and lose a life.

Other type of mechanics in the game involve time trials, survivor arenas and minigames base on collecting Wumpa Fruits. 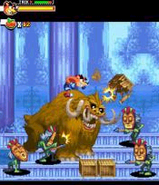 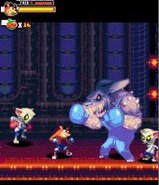 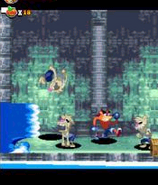 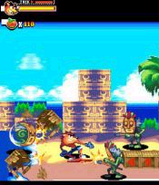 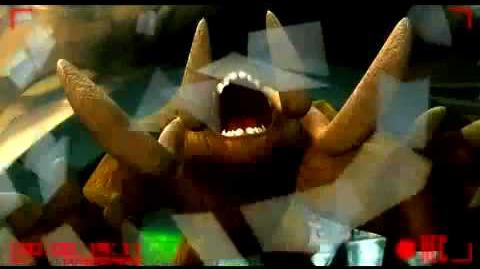 Crash of the Titans Mobile Phone Game Trailer - Thumbthug.com
The official trailer for the game