Bandipedia
Register
Don't have an account?
Sign In
Advertisement
in: Games, Crash of the Titans (Nintendo DS)
English

Crash of the Titans is a game in the Crash Bandicoot series developed by Amaze Entertainment and released in October 2007 for the Nintendo DS. It is one of the three portable versions of Crash of the Titans, along with the Game Boy Advance and mobile versions, however the story and gameplay are radically different from the other versions of the game.

The game starts with Crash sleeping peacefully in front of his house on Wumpa Island, when suddenly the witch doctor Aku Aku appears in his dreams telling him that Doctor Neo Cortex is at it again: The evil genius is using the power of the mojo taken from the Tiki Masks of the islands to turn the peaceful creatures that live there into horrible mutant monsters. He also kidnapped Aku Aku to harvest mojo from him too. Crash wakes up and goes to find Aku Aku on Mount Wumpa.

Arrived at the top of Mount Wumpa, Crash is confronted by Cortex and his powerful mutants. After defeating some of them, more powerful mutants appear and Aku Aku asks Crash to free him from the cage he was trapped in so that he would be able to help the bandicoot fight this monsters.

Aku Aku teaches Crash the jacking ability, with which he can control any mutant he wants after stunning them and with this newly discovered ability, Crash scares Cortex away.

They go back to Wumpa Island and meet up with Coco. Aku Aku and Crash now start a new adventure together to fight the evil mutants and restore peace in the Wumpa Island.

The two of them eventually find out that Cortex is using the mutants to harvest the islands of their resources to build a gigantic dancing robot called the Cortexbot, and use it to, not only draw people's attention with his groovy moves, but also destroy his enemies and conquer the world.

While Crash is busy collecting crystals on Wumpa Island, Nina is on N. Sanity Island with a special raygun powered by the mojo extracted by Cortex with a device he created and located in his lair on the other side of N. Sanity Island. Nina is sick of being a mere henchmen and decides to dethrone Cortex. She tries to convince N. Gin to join her side, before Crash interrupts them.

After Crash collects all the crystals and defeats Nina on N. Sanity Island, the two of them team up to stop Cortex and his giant robot. They fight their way up to the main control room where they have Cortex at gunpoint. Crash goes near Cortex to keep him from escaping while Nina shoots him with The Mutate-o-raygun 3000, but in a twist of events Crash deflects the shot with Aku Aku, the ray hits Nina turning her into a baby. With Nina out of the way Cortex can turn on Crash and fights him on a giant crab-like robot.

Crash is able to defeat Cortex and the Cortexbot explodes, sending Cortex flying out of the window and landing on the ocean nearby. Later the doctor is seen with his niece in his lair on N. Sanity Island, complimenting her for his evil behaviour.

The 100% ending is very different: Nina, instead of shooting Cortex, shoots Crash instead, turning him into a baby. So now she is the one that defeats her uncle and his robot, taking control over the Cortexbot and getting ready to march on Wumpa Island.

The gameplay is similar to the console version: Crash is able to perform simple punches and kicks at the beginning, he can double jump and surf on Aku Aku. Also he can do a stomping attack by holding Aku Aku with both hands and diving on the ground. The main attacks can be upgraded by spending mojo collected on Coco's shops, found in all four HUB worlds.

Crash has a life bar live in other versions of the game, but here he also has a feather bar: this acts like a shield, it gets damaged time after time and when it's completely empty Crash will start getting damage. The bar is similar to the feathers in Aku Aku's mask and can be refilled by breaking special boxes.

All the enemies in the game are controllable by the player with the help of Aku Aku's powers: Players need to use the stylus to throw Aku Aku from the touch screen in the direction the mutant is to jack them automatically. Every enemy has a different special attack that is unique for everyone of them. All the mutants that appear in the game are completely original and not present in any other version of the game.

Levels are linear and the point is to get from the start to the end, collecting mojo, breaking crates, fighting mutants and collecting the crystal that is hidden in every level. The game is more focused on platforming, with mutants being able to jump, a feature that is not present in the main version of the game. Every stage has a side-scrolling bonus round, not dissimilar to the ones found in previous instalments of the series. Also every level has a main mode, in which the player must reach the end of the stage, and a minigame, that can vary from collecting a certain amount of mojo to roll around on a Armydillo, or even ride a Pandebra. This last game is very similar to levels in previous games in which the player needs to ride an animal that moves forward automatically. Every level also hides Tiki Masks, that are hidden all around the levels and came in three different shapes: the bronze ones are 12 in every level, the bronze ones are 6 and the gold ones, only found inside the bonus stages, are 1 in each level. Gems make a comeback here, and every level has four of them: one is collected if all the crates are broken in a single level, one is collected if all the masks are found, one is collected if a particular amount of mojo is collected, and the last one is collected in the minigames.

Reception to the Nintendo DS version of Crash of the Titans was also mixed, but slightly more favorable than the console versions. Craig Harris of IGN considered the game to be "a fantastic apology for Crash Boom Bang!" and praised Crash's new design as well as the game's visuals, level design and gameplay variety, but felt that the combat and the incorporation of some touch screen elements were clunky. Zachary Miller of Nintendo World Report commended the fast-paced and interesting gameplay and colorful and distinct graphics, but felt that the environments and enemy types blended together, and while he was fairly impressed with the voice-acting, he was critical of the storyline and inclusion of a laugh track. Frank Provo of GameSpot commended the gameplay variety granted by the jacking mechanic and slaloming segments, and was impressed by the graphics, which provided a "slick and upbeat" presentation, but he lamented the game's short length. Louis Bedigian of GameZone considered the basic gameplay and graphics to be comparable to the original PlayStation games, but said that the frequent amount of enemies caused the gameplay to become repetitive, deemed the touchscreen controls unwieldy and unnecessary, and lambasted the voice-acting as childish. 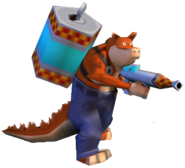 Dingodile in the Nintendo DS version of Crash of the Titans.

Dingodile in the DS version of Crash of the Titans.

Witch Doctor in the DS version of Crash of the Titans.

Whalephant in the DS version of Crash of the Titans. 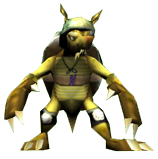 Armydillo in the DS version of Crash of the Titans.

Bouncer in the DS version of Crash of the Titans. 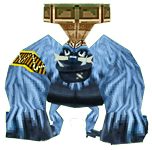 Platform Ape in the DS version of Crash of the Titans.

Tiki Masks in the DS version of Crash of the Titans.