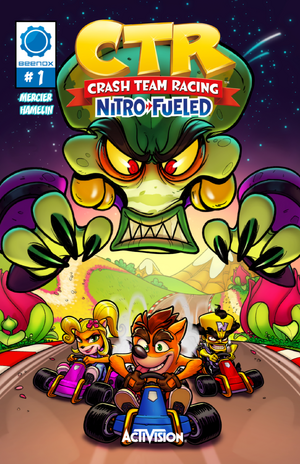 In a dark smoggy city on the planet Gasmoxia, Nitros Oxide leads his henchmen Zem and Zam through a corridor and into a room filled with racing trophies. Oxide expresses his pleasure to be back home surrounded by awards that prove his superiority before telling his minions that he has travelled to various galaxies and conquered each of their worlds by being the fastest, yet there was still one galaxy he has not invaded: the Milky Way. Only by dominating the worlds in the Milky Way and enslaving their inhabitants will he become the undisputed fastest racer by all.

Later, after transforming Mars into a concrete parking lot (like he has done with many worlds before it), Oxide believed he has finally proven himself to be unbeatable until a small crude picture of Earth hits his spaceship's windshield. Oxide is infuriated that there was still another planet left to conquer and soon travels to Earth to do just that. Meanwhile at Coco Park, Crash Bandicoot, his little sister Coco and their archenemy Doctor Cortex are kart racing against one another when they are suddenly interrupted by the hologram of Nitros Oxide issuing a challenge to the Earth's population.

Oxide's spaceship descends above Gem Stone Valley as its owner orders his robots to hide four keys somewhere on the world's surface and announces only the racer who has obtained them all will be worthy enough to race him. The first robot's key is obtained by Ripper Roo who grabs it after the key falls from the sky and bounces off his head. The next key is taken by Papu Papu after he destroys the second robot using a blowgun. The third robot enters a mine where it is immediately incinerated by fire (presumably from a dragon) and its key is found by Komodo Joe. The fourth robot is shot out of the sky and its key falls through the coin slot of a giant slot machine before landing into the hands of Pinstripe Potoroo.

The only surviving robot returns to Oxide in rough shape and is then immediately ordered by the alien to ensure various racetracks are tweaked to his advantage. The robot complies while insulting Oxide behind his back as it heads out again to scan Crash Cove, Tiger Temple, Papu's Pyramid and Polar Pass. Meanwhile, Oxide revs up his hovercraft, ready to the world who the fastest racer really is.

Retrieved from "https://crashbandicoot.fandom.com/wiki/Crash_Team_Racing_Nitro-Fueled_Digital_Comic?oldid=190491"
Community content is available under CC-BY-SA unless otherwise noted.