Crash Racing is a mobile phone game released on December 2005. It was developed by Kaolink.

Crash Racing is a racing game which heavily based on Crash Tag Team Racing. Like CNK for the mobile, it has a Single Race and a Tournament mode. They function the same way too- Tournament places you in a series of 3 races, all from the same environment. Get the highest overall ranking and you unlock a new environment and a new car for each character. You should know how Single Race works. The environments are Pirate (based on Mystery Island), Castle (based on Happily Ever Faster) and Egypt (based on Tomb Town).

There are 4 characters in the game - Crash, Cortex, Nina and Pasadena, but they all play identically. The handling differences come with the cars, since they have 3 types of stats: grip, top speed and acceleration. When racing, your car keeps going forward and you can't stop (though you can go faster or slow down). You can pick up pink orbs to collect power-ups.

The best similarity with Crash Tag Team Racing is that you can fuse your car with an opponent's. The red light in the corner starts flashing when you approach someone, and that's your chance to clash (fuse). This joins both cars together, but it only affects speed (it makes you go faster). While you can't pick up power-ups this way, you can shoot cannon balls, though you'll still be driving while doing that. Your opponents unclash shortly after you join them, but you can also do that yourself.

Steer - Press 4 to steer left and 6 to steer right.

Shoot - Press 5 to use a power-up or shoot when you're clashed.

Clash - Press 1 near someone.

Mine - Lets you drop a mine behind you. 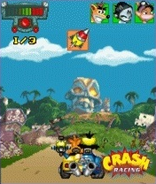 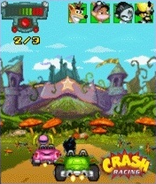 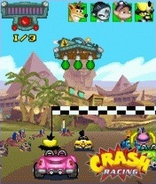