Single player
This page is about the 2004 mobile phone tie-in videogame developed by IPlay. For the multiple other mobile phone releases with similar titles, see Crash Nitro Kart (disambiguation).

Crash Nitro Kart is a mobile phone game released on the 20th of September 2004. It was developed by IPlay.

Crash hits the track in his most fast-paced adventure yet! Kidnapped by the ruthless Emperor Velo and forced to race in his galactic colliseum, Crash must race his way to victory against foes both old and new to save the Earth from destruction!
Set in 3 stunning universes players can race as one of four classic Crash characters in a single race or tournament mode.

The game has two modes: Single Race and Tournament. Tournament makes you drive through all 4 tracks of an environment in succession, accumulating points based on your position. If you rank above the other characters, you win. Only by winning tournaments can you unlock new environments, each based off of certain courses in the Game Boy Advance version of Crash Nitro Kart: City (based off of Electron Avenue), Beach (based off of Inferno Island) and Castle (based off of Clockwork Wumpa).

Each track is very simple with small allusions to the console versions: there are turbo pads, holes and weapon crates. The theme song is that of Crash Bandicoot: Warped. 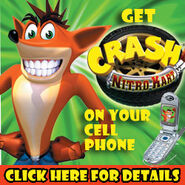 A popup advertising the game from the official 2004 Crash Bandicoot website.