The Crash Crate is a crate that appears in several Crash Bandicoot games. When the player destroys this crate they receive one extra life. This crate has Crash's face painted on its side. In Crash Bandicoot: The Wrath of Cortex and Crash Bandicoot 2: N-Tranced it has Coco's face on it when playing as Coco and Crunch's face on it when playing as Crunch. In Crash Twinsanity it has Cortex's and Nina's faces when playing as them. After being broken and the player loses a life, a ? crate will take the place of a broken Crash crate until the level is exited and reentered. However, there are two Crash crates in the Un-Bearable secret route that will never change to a ? crate. In the first three Crash games, Crash Twinsanity, and the handheld games, a life will come out of it, and it can be spun away (except for Crash Twinsanity), while in The Wrath of Cortex, they are automatically earned.

Crash Crates also appear in Skylanders: Imaginators, occasionally summoned through Crash's tertiary attack, Crate Going. This is used as a part of Crash's unique extra lives mechanic, to compensate for his low health. Crash initially has a maximum of three lives total, but this can be upgraded to five using in-game currency.

A Crash Crate from Cortex Strikes Back.

A Crash Crate from the Crash Bandicoot N. Sane Trilogy. 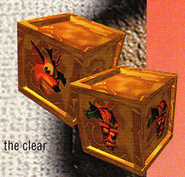 A Crash Crate next to an Aku Aku Crate. 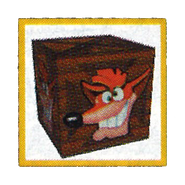