Crash Cove is one of the first tracks available to play in Adventure Mode, along with Roo's Tubes, and is located in the N. Sanity Beach world section. The track itself is based heavily on the beach's design.

As the first race track in the game and one of the first two available to race in Adventure Mode, Crash Cove is an easy race to play with a simple layout to allow the player to get used to the controls of the game. As such, the track introduces the elements that are frequent in races, such as crates lined up in rows of four, shortcuts, ramps and environmental hazards (i.e. the water).

The track begins with a straight line that is eventually separated by a large rock. This is followed by a left turn, so it is advised to steer left of the rock (unless in a CTR Race, as the 'R' letter is located on the right). After the left turn, racers will have the option of using a ramp. It is advised to jump off the ramp for several reasons - it offers the chance for a hang-time turbo boost, and there are two Wumpa Fruit crates on the jump. After this, racers must drive under a bridge, which can be tricky as it is easy to crash into the bridge support.

A shortcut is also available here that allows racers to avoid driving under the bridge. If a racer were to use the hang-time turbo boost from the ramp's jump to land in the water, they could jump off a smaller ramp under the water's surface to jump onto a grassy ledge next to the main track, before hopping back onto the main track. This is handy for shaving off a few seconds and eliminates the risk of crashing into the bridge. The shortcut is also necessary for the CTR challenge, in order to get the 'T' letter.

After this, racers drive over a fairly long, straight bridge over the water. Racers should stick to the middle of the bridge, lest they fall off the sides into the water. After this, there is a left turn, and racers have two options. They may turn left as normal, or they could drive onto the ship that has crashed into the beach. Some racers prefer to drive onto the ship for the hang-time turbo boost from jumping off, whilst others prefer to power slide on the main track for a power slide boost. Racers must take the first option if they want the 'C' letter for the CTR challenge.

The finish line is then visible after a few turbo boost pads. 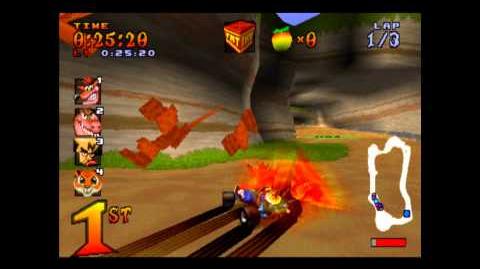 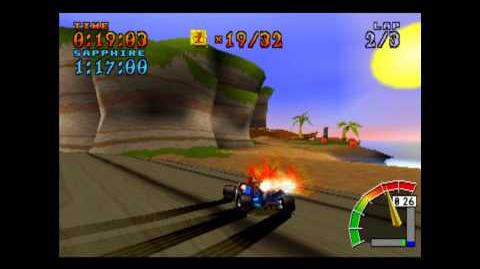 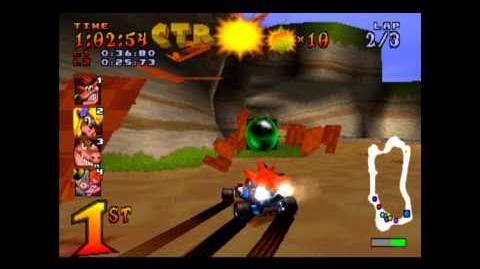 Artwork of the second part of Crash Cove at sunset 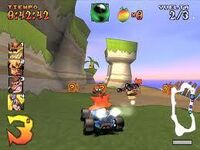 Coco and Dingodile in their beach skins