Crash Bandicoot Evolution was the original working title for Crash Twinsanity.[1] In this phase, the game was largely different from the game that would later become known as Twinsanity. It would have featured a large-scale sci-fi setting combined with some RPG elements, and the tone of the game would have been a bit more grim. Only a few screenshots from the game are available and most of the material that exists is concept art for Crash Twinsanity that remains unused.

The plot was that the Evil Twins and the Ants were taking over the world and Crash had to travel to different planets to help their inhabitants against the Twins. Most of the enemies set to appear can be seen in Twinsanity's concept art (the Goat King, rock bees, etc). The known worlds that were set to appear are: a fish-people inhabited world, a planet known as Gaudi, and a place called the "Hanging City", where the rich live in the floating part above and the poor live in the slums below. Crash was going to have to undertake quests to gain the trust of the different inhabitants of each world. To aid him, he would have had a companion on his arm called Foofie, an animal that could transform into different shapes. Crash would have also had to team up with Cortex against the Twins, just like in the final game.[1]

The fish people can be seen in Crash Twinsanity's concept art, along with a worker from the Hanging City slums. There is also concept art for the game showing Crash in a space suit.

The storyline of the game was changed to what became Crash Twinsanity partly because the original plot was too similar to the original Ratchet and Clank, in the sense that the antagonists were taking the best parts of other planets to make their own. 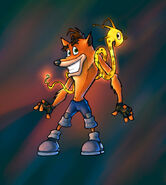 Retrieved from "https://crashbandicoot.fandom.com/wiki/Crash_Bandicoot_Evolution?oldid=175992"
Community content is available under CC-BY-SA unless otherwise noted.