Uka Uka calls upon the assistance of Dr N. Tropy. He in turn recommends the services of N. Trance. Using a teleporter, he plans to transport Crash, Crunch, and Coco to a star base somewhere in space. However, Aku Aku prevents the teleportation from completing, and Crash is saved. However, the evil side is left with Fake Crash: a result of the incomplete transformation. Coco and Crunch are hypnotized and turned against Crash. Crash now has to save his friends and defeat N. Trance.

For the first time in a Crash platformer, N-Tranced also features multiplayer competitive gameplay. In order to play, both players require a cartridge of the game.

Two players battle in the game's Atlasphere mode. Choose between the battle modes Domination, Bumpers or King of the Hill on a variation of maps. Depending on the players' progress in one player mode, Crash, Crunch, Coco, Fake Crash, N-Trance and N. Tropy are all selectable characters.

Two players can choose to race in any of the on-foot levels unlocked in the one player story. Curiously both players play as Crash and the level data for both players is separate (a necessity for both to progress through certain gimmicks such as the vehicle crates).

In addition, the game can be linked to Crash Bandicoot: The Huge Adventure via GBA link cable to unlock extra content. Through this option, Dingodile, N. Gin, Tiny, Neo Cortex and Megamix can be unlocked as extra playable characters in Atlasphere mode.

As seen in the previous game, this entry in the series goes on giving the GBA most of the features and environments seen in the Naughty Dog trilogy. First of all, instead of using a Warp Room, "N-Tranced" makes use of a "Warp Zone" structured like a map, in which every single portal is entered using the same animation seen in Crash 3 - except the lack of any sight of the level outside it. Then, the only element hailing from Crash 2 is the usage of the jungle levels' background music in the atlasphere stages as well as in the very first stage, Island Intro, which concept was already seen in Crash 2 - though it was called just "Intro" and, instead of its heir, wasn't replayable.  Also unlike the "Intro" of Crash 2, the Island Intro level is required, and contains a crystal, gem, and relic, whereas Crash 2's level could be exited from through the pause screen and skipped.

Also, the Egyptian tomb (like Tomb Time) and Arabia stages (like Hang'em High) are based off levels from Warped, as well as their own background music, while the volcano island ambiance hails from a non-ND game (despite its music being from a Prehistoric level like Bone Yard.  The water levels offer the same tropical sea setting seen in Warped levels such as Makin' Waves, but here Crash does some water-skiing while being tied to an off-screen motorboat and chased by a shark; therefore, these stages act as the "escape" ones. The motorboat may be driven by Coco, but since two water stages out of three are part of the storyline in which Coco is still under hypnosis, this hypothesis is to be scrapped. In a McDonalds game machine based on these levels, Cortex is driving the boat in what is a shocking development. The flying levels of the prequel, mixing the jetpack itself with fights against blimps, are now substituted by another kind of escapes, in which Coco, wearing an astronaut suit and tied up to a hovering "space life belt" of sorts, has to manage to escape a giant - and unseen since being offscreen too - fireball (despite the first stage in this series being called "Run from the Sun") while fighting between meteorites as well as "Lab Astronauts". The "atlasphere" concept, instead, hails from the same non-ND game said above.

N. Trance himself (or even the eponymous game) may be considered as a nice way to allow Fake Crash's, Crunch's and N. Tropy's handheld debuts, as well as Coco's debut as a boss in the whole series.

Colored gems are still featured, but in an entirely different way. In each Egyptian level a red "gem shard" (1/4 of an usual colored gem) is hidden; likewise, the Volcano stages hide blue gem shards as well as green gem shards are hidden within Arabian levels.  When N.Trance is defeated, the last section of the map (a wooden bridge set in outer space) is accessible.  This portion acts as N.Tropy's hideout, and instead of the portals, the last 3 levels are accessed through the now recreated gems (though the way the "warping" animation is seen suggests the stages are in fact the gems themselves).  Getting all four gem shards of any color unlocks one of these levels.  Each of these really hard levels has the relative colored gem to be found, as well as the normal gem and the relic.  After each colored gem is achieved, the portal to N. Tropy, disguised as a gear, is accessible.  In these levels, the colored gems act similar to how crystals act in most levels.  In order to access time trial mode, Crash must get the colored gem from the level first, and all three colored gems unlock the boss for that area.

The fight against N. Tropy is a mostly faithful recreation of the battle fought in Warped, but made in a significantly longer and harder way. N. Tropy fights Crash in an arena structured just like its Warped counterpart, only set in Arabia. Tropy has a total of three hit points, but once defeated, he recovers and causes the battle to start over in an Egyptian tomb arena with smaller platforms, now attacking at a faster rate. As soon as he loses all of his health again, he restarts the battle one last time by setting it in the volcano environment. This time the player can defeat him once for all, but if they die, the battle has to restart for real, as a whole.

As it was in the case of the game's predecessor (and as partially said above), this game's soundtrack references most of Naughty Dog's work on the series. First of all, "Island Intro" as well as the Atlasphere stages use the background music of the jungle levels seen in Crash 2 as their own, only re-arranged in a way even different than the one heard in The Huge Adventure. The Arabian stages and Egyptian tomb stages, being taken from Warped, have also music similar to their original counterparts but adapted to the GBA and therefore been shortened and in MIDI format.

Interestingly, Fake Crash's boss fight uses a rearrangement of the background music of Warped's Rings of Power (level accessed through the thirtieth button, only found in the secret world and entered by having 25 relics).

All stages retain their one player music themes in multiplayer, though oddly the Atlasphere multiplayer mode lacks background music.

Curiously the Track 5 (a rearrangement of the racing levels' theme in Warped) is not featured in the actual game, suggesting it belongs to an unused area or sequence. Track 7 is also not used in N-Tranced, instead a rearrangement of the background theme for the futuristic levels in The Huge Adventure.

(Listed as "Evil Coco" but not to be confused with the real Evil Coco, an unused character from Crash Twinsanity) -Avoid Coco's attacks and lava while Crash fights in a volcanic area. This level is on the copter. She has a total of three life points.

This boss battle may be considerably short (lasting only 11 seconds at the very least), depending on the player's skills. In the Egyptian tomb, Crash faces his goofy doppelganger as anyone would imagine the fight: Fake Crash mirrors (literally) every single move made by Crash. Spinning doesn't damage Fake Crash (But Crash himself), but serves as the only way to switch the sides. There are the spear traps typical of this environment, set in a mirrored way but not working as such (that is, alternatively). Keeping these facts in mind is key for any player aiming to the faker's defeat. He has a total of four life points.

(First, get all blue, green and red gem shards, beat all the extra levels and then Crash can face N. Tropy) This fight has three rounds.

Despite there are 5 bosses instead of the prequel's 4 (and, oddly, 21 crystals - neither 20 nor 25), there are still only 4 power-ups and the Fruit Bazooka from Crash Bandicoot 3: Warped is still absent.

However, the Super Charged Body Slam, as well as Double Jump, are available from the very beginning of the game; the first two power-ups, gained by defeating the first two bosses (being the brainwashed Crunch and Coco respectively), are the Super Slide (a faster and more powerful slide, executed by pressing R while holding L and while standing still) as well as the Rocket Jump (maybe referencing the "Moon Jump" seen in most platform games through cheat devices - this one being an extra-high-but-not-long jump executed by jumping while standing still and holding L). By defeating N.Tropy the player isn't awarded by any powerup at all.

Besides, the "power-up ? panels" appear in both "Island Intro" and "Globe Trottin'", as in-game tutorials while outside of Time Trial mode.

Sadly, this wide range of moves available to Crash, united to the low number of buttons of the GBA (compared to those of the PS1, that is), automatically led to the overlapping of controls and to a glitch which, if the player press R right before landing, results in a (often unwelcome) slide.

Coco, Crunch and Fake Crash about to be hypnotised by N.Trance
N.tranceartwork.gif
Single artwork of N.Trance 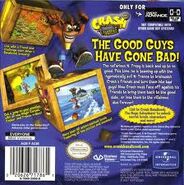 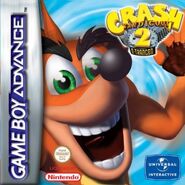