This is a list of all skins in Crash Bandicoot: On the Run!. There are currently 91 skins in the game, although not all started cycling through the Vending Machine. The game launched with 71 skins. 20 more were added with the Running Outta Time update.

Skins are cosmetic items which change the appearance of Crash and Coco. Equipping skins grants the player bonuses, such as increased collection rates on Ingredients during Collection Runs, on Trophies during Battle Runs and bonus Aku Aku masks at the start of a Collection Run or Battle Run.

Each skin is assigned a rarity rating. This rating determines how effective the associated material and trophy benefits are for that skin, ranging from Common skins providing a 10% boost to Legendary skins giving an 80% boost. The rarity of the skin also determines its price in Purple Crystals, with Common skins worth 60

and Legendary skins worth 400

. The rarity of skins listed below are shown by color, with common written in green, epic in purple, rare in blue, and legendary in gold.

Skins are obtained mostly by purchasing them with Purple Crystals from the Vending Machine at Coco's Base. They can also be purchased for real money with temporary offers, or by earning them through Seasons. In both of those cases, the concerned skins are later introduced in the Vending Machine. 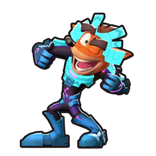 Akano Coco
Add a photo to this gallery 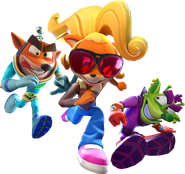 Various renders of skins for Crash and Coco.

Concept art of Crash's Tennis skin and Coco's Golf skin.
Add a photo to this gallery

Retrieved from "https://crashbandicoot.fandom.com/wiki/Crash_Bandicoot:_On_the_Run!/Skins?oldid=229494"
Community content is available under CC-BY-SA unless otherwise noted.