Platform
Crash Bandicoot: Mutant Island is a mobile phone game in the Crash Bandicoot series. It was developed by Vivendi Games Mobile and published by Glu Mobile under Activision's license. It was released on July 30, 2009. It is the seventeenth installment in the series. It takes place between Crash of The Titans and Crash: Mind Over Mutant.

Crash is sleeping, but is alarmed when an unknown bandicoot wakes up Crash to alert him that his sister, Coco Bandicoot has been kidnapped by Doctor Neo Cortex. Crash ventures through the jungle until he eventually catches up to Cortex, who is using a machine to destroy Crash. Just as Crash was about to defeat Cortex, Cortex smashed Crash leading him to the ground, where he is told that Coco escaped and returned back home. When returning back home, Coco sees headphones and suspects that Cortex has imprisoned the animals, and Crash was going to another adventure to defeat Cortex and free the Hypnotized Bandicoots from Cortex. Exploring three different islands to discover the Cortex flying castle in this high-speed adventure, along the way Crash will have to find and take control of the Three Legendary Titans of the three Mutant Islands. Once the missing marsupials are freed, defeated the mutants that blocked his way to the flying Cortex Castle and gained the support of the Three Legendary Titans, Crash will once again come face to face with the Cortex robot.
Once defeated, Crash will be welcomed triumphantly by the bandicoot tribe with a big party. 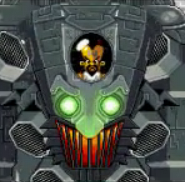 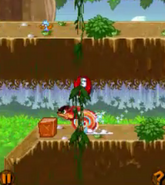 One of Crash's sprites from the game

A sprite of Crash in the game 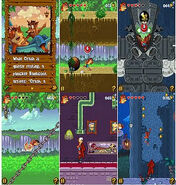 This is a 6 pictured screenshot of the Crash Bandicoot: Mutant Island game.