Crash-fish are enemies that appear in the prehistoric levels in Crash Bandicoot: Warped.

They are only found in Dino Might!, hopping around in the water and blocking the path.

This fish has Crash's head, orange scales, a blue tail resembling Crash's pants, large brown eyebrows and a dark blue nose. It spins like Crash does every few seconds, making it invulnerable to direct contact.

Crash-fish will devour their prey if they come near. They can be defeated with the Fruit Bazooka or any physical attack, as long as it is not spinning. If the Crash-fish is hit by the spin attack during its own spin, the attacker will be lunged backwards for the duration of their spin.

The Crash-fish reprise their role in the N. Sane remake of Warped, with no significant changes.

Concept art of the Crash-fish.

A Crash-fish in a Japanese guide for Warped. 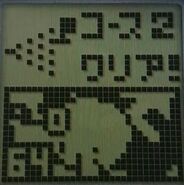 A Crash-fish in Crash Anywhere.

The Crash-fish cameo in Dingo Canyon in Nitro-Fueled.