Start a Wiki
watch 02:38
The Loop (Games)
Do you like this video?
A Crane is an enemy in Crash Bandicoot: The Wrath of Cortex only appearing in Coco's Japanese levels, making its debut in Banzai Bonsai. It's white with a red circle on its head and wears some Japanese garments and it will stand in water and peck at Coco in these levels. It can be defeated by a jump on the head.

All of these are defeatable except for one odd crane in the background in the area with the spinning platform; it is part of the background but still moves and pecks. Note that the cranes are never seen on land. 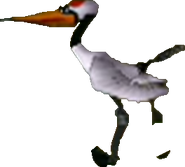 Add a photo to this gallery
Crash Bandicoot: The Wrath of Cortex
Retrieved from "https://crashbandicoot.fandom.com/wiki/Crane?oldid=190289"
Community content is available under CC-BY-SA unless otherwise noted.