Pincers
Crabs are decapod crustaceans which are generally covered with a thick exoskeleton and come armed with a pair of pincers. They make a few appearances as generic enemies as well.

Crabs are the first enemies encountered in this game, and, by extension, the entire series. They only appear in the beach section of the level N. Sanity Beach. They do not directly attack Crash. Instead, they simply walk from side to side while blindly snapping their pincers. They are easily defeated with a jump or spin attack.

A crab makes a cameo appearance in the first ending, passing by Crash and Coco as she wonders what happened to Doctor Neo Cortex and his Cortex Vortex.

Crabs make a reappearance in the level Crash and Burn, where they randomly scuttle from left to right, shadowboxing at Crash. They can first be found at the beginning of the level when crossing the dock after riding the turtle there. When Crash gets near them, they start punching at the air with their pincers.

Crabs reappear as generic enemies. They appear on N. Sanity Beach and Jungle Bungle where they block Crash by his every movement.

Their appearance seems to be a deliberate throwback to the first game in the series. However, these crabs wear blue shells, implying that they are hermit crabs and, therefore, not the same crabs that Crash fought in Crash Bandicoot. In this game, they can dig underground to pop out of the sand, and ambush Crash.

Another variant of the Twinsanity hermit crab was planned but ultimately cut from the game; a "Barrel Hermit Crab". This crab was almost identical to the regular crab except its shell consisted of a metal barrel. This version was originally intended for a zone taking place on Earth where the Evil Twins had drained the ocean for their nefarious needs.[1] One can also be seen on the deck of N. Gin's Battleship in a concept art for the High Seas Hi-Jinks level.

Crabs reappear in Skylanders: Imaginators in the Crash Bandicoot-themed level Thumpin' Wumpa Islands, under the name Bongo Beat Crabs. They are introduced with Hula Chompies.

Their appearance is very similar to how they appeared in the first game, except now they have bongo drums on their back that they beat with their pincers, and they move and attack in time to the music.

Crabs reappear in the N. Sane Trilogy, reprising the role they had in the first two games. Unlike previously, they have blue eyes instead of white.

Additionally, the crab that appears in the first ending of the second game has a bigger role. While Coco is talking to Crash, the crab walks by them, notices the sleeping Crash, grabs him by the foot, and drags him off-screen.

Crabs appear in It's About Time, appearing at the beginning of the level Rude Awakening and acting much the same way that they did in Crash Bandicoot. In the in-game concept art gallery, they are referred to as Cantankerous Crabs.

Crabs appear in On the Run!, reprising the role they had in the console games.

These crabs have bred in different places, but almost never off of N. Sanity Island. This is demonstrated in Crash Bandicoot: The Wrath of Cortex, where the first crab seen away from N. Sanity Island is a different species, living on the volcanic island in Crash and Burn. Hermit crabs have been seen living on N. Sanity Beach in Twinsanity. They can also be found in the jungle, but not too far from the beach, making only three appearances there.

A crab in Crash Bandicoot. 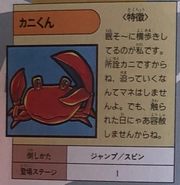 A crab in Crash Bandicoot: The Wrath of Cortex.

A crab in Crash Twinsanity.

Concept art of crabs caught by the Rhino Pirates in Crash Twinsanity. 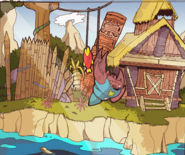 Concept art of a crab caught by the Tribesmen in Crash Twinsanity.

A crab in the Thumpin' Wumpa Islands level.

A crab in the Crash Bandicoot: N. Sane Trilogy.

Crabs in concept art for Crash Cove in Nitro-Fueled.

A new variety of crab seen in a promo image for On the Run!.

A crab on the illustration on the inside of the cover of The Art of Crash Bandicoot 4: It's About Time.

Rude Awakening's color script for It's About Time (Crab in top left panel).

Concept art of a cantankerous crab from It's About Time.
Add a photo to this gallery