This article is about the machine. For the level of the same name, see Cortex Vortex (level).

"We are closer than ever before! Quickly, into the Vortex!"
"But Doctor Cortex, the Vortex is not ready. We have no idea what it could do!"

The Cortex Vortex is a mind control device built by Dr. Neo Cortex that forces animals already subjected to the Evolvo-Ray to become Cortex's mindless slaves.

The Cortex Vortex's first appearance was in the original Crash Bandicoot game. It was designed to make any creature exposed to it obey Cortex completely, and when combined with the Evolvo-Ray, it could also create an army of mutant soldiers for world conquest. The interior of the Cortex Vortex is lined with television screens that spin around the subject like a vortex. The screens then broadcast and feed signals directly into the subject's brain, theoretically turning them into Cortex's mindless slave. However, the Vortex was still at the prototype stage, and while it did imprint some loyalty to Cortex on its mutant subjects (at least until later games), it also gave them distinct personalities due to the signals the machine broadcasts (Ripper Roo became a giggling maniac, Koala Kong a flexing narcissist, and Pinstripe Potoroo a trigger-happy paranoid).

Despite all this, Cortex insisted on using it on his newest mutant, Crash Bandicoot who was slated to lead his "Cortex Commandos" as their General to world domination. However, the machine rejected Crash, who used the opportunity to escape the castle. Cortex deemed his experiment with Crash a failure and was going to subject Tawna to the Vortex instead. However, Crash arrived in time to stop Cortex by burning down his castle, which presumably destroyed the Cortex Vortex, and saved Tawna.

Immediately after the events of the first game, Cortex had discovered a new power source he could use to succeed in his plans: crystals. After spending a year building a new and improved Cortex Vortex (one which would be big enough to enslave the planet), his new right-hand man, Dr. N. Gin, informed him that he had only found the "Master Crystal", and that 25 more "Slave Crystals" were needed to fully power the machine. With no other earthbound operatives to assist him, Cortex manipulated Crash into gathering the crystals, claiming that it would help the world survive a "solar flux" with enough power to tear the Earth apart. However, when Crash had gathered all 25 crystals, Coco discovered and revealed Cortex's true intentions: to harness the solar flux's energy with the crystals, using it to power his new Cortex Vortex and brainwash the entire world. His lies exposed, Cortex tried to escape with the crystals to the Cortex Vortex, but Crash defeated him and left him stranded in deep space. Afterwards, Crash gave the 42 Gems he gathered to Dr. Nitrus Brio, who used them to power up a laser turret that destroyed the Cortex Vortex.

The Cortex Vortex appears in Dansu! De Jump! Na Daibouken known as the Base Station. It is designed to resemble the Cortex Vortex Space Station from Crash Bandicoot 2, but it's much smaller. It has the Vortex Dome on a flat surface with a ray gun that looks like the Evolvo Ray. N. Gin controls the ship while Cortex is out helping Crash get the Power Stones to power it.

The Cortex Vortex had a very minor, but important role in Warped. A piece of the Vortex plummeted down to Earth after its destruction in Cortex Strikes Back, colliding with an ancient temple and freeing the evil Uka Uka from his imprisonment.

Crash of The Titans

Though it didn't appear, more on its construction was revealed. According to one Ratnician, after Uka Uka met Cortex, he gave Cortex some of his mojo to aid in his plans for world conquest. Later on, Cortex and N. Brio had used the Mojo to build the original Cortex Vortex.

The Vortex reprises its role from the original trilogy here, with no significant changes to note.

The original Cortex Vortex has a short appearance in It's About Time. It can be seen as it is in the N. Sane Trilogy when Crash, Coco and Cortex travel back in time to Crash's Vortex treatment from the first game. Here, the present Crash accidentally knocks a power source out of its container, revealing the reason that the Vortex had rejected Crash in the first place. 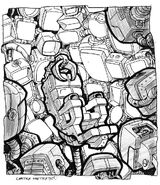 Concept art of the interior of the Vortex.

The Cortex Vortex on the Main Menu from a Prototype of Crash Bandicoot.

Wreckage of the Cortex Vortex soaring towards Earth. 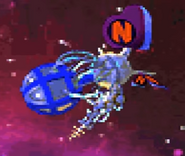 The space station in The Huge Adventure. 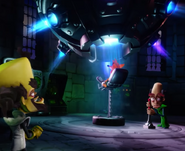 The Cortex Vortex in the remade Crash Bandicoot intro from N. Sane Trilogy.

Crash in the Vortex in N. Sane Trilogy as it malfunctions.

The Cortex Vortex space station from Cortex Strikes Back in N. Sane Trilogy.