This page refers to the castle itself. Click here for other uses of "Cortex Castle".

This castle is a maze! I alone know all of its secret halls and passages!

Neo Cortex (past) in Crash Bandicoot 4: It's About Time

Cortex Castle (also known as Castle Cortex[1]) is Doctor Neo Cortex's first base in the Crash Bandicoot series. Even though it was set on fire at the end of the first game, areas of it survive and are visited in Crash Bandicoot 2: Cortex Strikes Back. In Crash Bandicoot 4: It's About Time, Crash, Coco and Cortex go back in time to before the castle was destroyed to stop Cortex from undoing Crash's creation.

A track based on it appeared in Crash Team Racing, as well as the Citadel City section of the same game. He also used it as his base in Crash Nitro Kart before being abducted by Emperor Velo XXVII, suggesting the castle was eventually restored at some point.

During the development of the new "Cortex Commandos", Cortex Castle was conceived more as a fortress than a castle tower[1]. It was to be set atop a snowy mountain on Cortex Island, rising some 8000 feet above sea level, where Cortex's boss fight would take place. The castle was built on top of the ruins of an ancient tribe's palace; consequently, its foundation is magically indestructible. Castle Cortex is heated geothermally and draws power from the Cortex Power factory. The sewers beneath it generate much pollution, damaging the Wumpa Islands ecosystem.

The castle is located on Cortex Island and debuted in the original Crash Bandicoot game as the residence and base of operations of the game's main antagonist, Dr. Neo Cortex. According to the game, the castle was powered by the Cortex Power factory owned by Cortex's minion, Pinstripe Potoroo. Crash's main goal in the game is to make his way to the castle and rescue his girlfriend, Tawna, from Cortex, who plans to use her for genetic experiments in his Cortex Commando army. Inside the castle, Crash battles Cortex's assistant, Dr. Nitrus Brio, as well as Cortex himself. The castle eventually went up in flames, leading Crash to flee through Cortex's lab and onto his airship where the final battle takes place.

In the alternate ending epilogue, it is stated that Papu Papu sold the ruins of the castle to a resort developer and used his newfound wealth to create a souvenir shop on the island, implying the fire destroyed the castle. However, the castle also appears in the beginning of Crash Nitro Kart and as a track in Crash Team Racing, implying it was rebuilt.

In the original ending to the game, the castle can be seen in the ruin levels and the introduction in Crash Bandicoot 2: Cortex Strikes Back. It contains the six warp rooms from the game which are connected via a small elevator in the center of the room. Boss characters can attack Crash when he ascends to the next warp rooms.

The instruction manual states that Cortex examined his discovered crystal in his laboratory, implying he resided in the castle for a short period before leaving to create the Cortex Vortex in space. In addition, the castle also contains the secret warp room housing the levels Totally Bear and Totally Fly. Cortex alleges that the warp rooms themselves were built by an ancient civilization[2]. During the end of the game, the castle is also shown to contain N. Brio's base of operations where he destroys Cortex's space station with his laser beam.

Cortex Castle is seen in the intro, where it is again Cortex's base of operations, where Cortex, N. Gin, Tiny Tiger, and Dingodile are seen. The Evolvo-Ray is again seen when N. Gin attempts to zap a kart with it, but Tiny accidentally flattens Dingodile who was about to activate it. Then the tower that they're in gets abducted by Velo and later sent back to earth when Team Cortex accepts Velo's challenge.

In the Thumpin' Wumpa Islands level, Cortex Castle can be seen in the background of the level.

During the events of It's About Time, Crash and Coco had chased after Cortex who had traveled to Cortex Castle in 1996 as part of his attempt to prevent his past self from making his biggest mistake in creating Crash. After traveling through the entire castle, they confronted the mad scientist who is operating a large machine along with the four Quantum Masks who were held captive and tries to defeat them, only to be thwarted once again by the bandicoots. Following this, the Past Cortex is freed and he goes into the other room to proceed with his experiment while the Quantum Masks banish the present Cortex to the end of the universe.

Coco Bandicoot's flashback tapes confirm that the castle was inhabited even after the fire in Crash Bandicoot, as Cortex continued his animal experiments there.

Inside the hallways, there are many items bearing Cortex's "N" insignia. The hallways are inhabited by spiders and rats. The castle pillars are decorated with spikes and gargoyles.

This room contains the Evolvo-Ray, as well as a small lamp, a window, and a table for zapping animals with the Evolvo-Ray. It appears in Crash Bandicoot and Crash Nitro Kart.

The Cortex Vortex room is the room that contains the Cortex Vortex, as well as its controls, and a window. There is another area of this room with various cages for the animal subjects.

This is a room that contains various robots and devices. In game, it is the Castle Machinery level.

N. Brio's Laboratory is a small lab where N. Brio does his experiments. It also has two desks and a fenced opening.

The Lab is a set of hallways with technology and Lab Assistants. There are also areas of this room/hallway that contain several spiked pillars in a dark pit.

A room where Tawna is kept, there are also two balconies and a picture of her. Most of the hall is one giant pit. 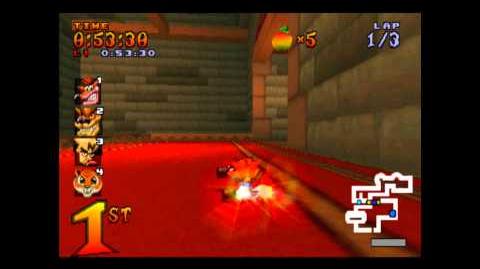 The Castle as seen in the intro.

The lab of Cortex Castle as seen in the intro of the first Crash Bandicoot game.

Cortex Castle can be seen in the Native Fortress. 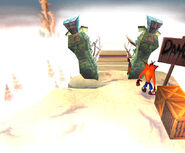 The castle can be seen in background on the left in the Road to Nowhere.

Cortex Castle can also be seen in Sunset Vista.

Cortex Castle in the background of a concept illustration.

Cortex Castle in the background of a concept illustration.

Cortex and Brio with their newly created minions in the Evolvo Ray Room. 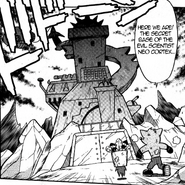 Cortex Castle as seen in the intro of Crash Nitro Kart.

The tower of Cortex Castle being abducted by Emperor Velo XXVII.

Some of Cortex's minions playing cards in Cortex Castle.

From the opening scene of Crash Bandicoot N. Sane Trilogy.

Castle Cortex in Crash Bandicoot 4: It's About Time.