View source
watch 02:17
New Pokemon Games - The Loop
Do you like this video?
Play Sound

Cortex's airship is Cortex's aerial transport vehicle when he is not using his hoverboard. He usually ties the airship with a rope to his current base.

The airship is first seen tied to Cortex's Castle in the intro in the outside view of the castle. Later, in the level select map, it is portrayed as the warping area for Cortex's boss fight. During the boss fight, Crash stands atop the airship to fight Cortex, and when he is defeated, Crash and Tawna ride away on it. Also, in the alternate ending when Crash and Tawna escape on a bird, it can be seen again tied to the castle. In the boss fight with Cortex, Crash can also jump off the airship, causing him to lose a life.

The airship can be briefly seen as Cortex falls in the intro, but has a metal balloon instead of a purple helium-filled one.

Cortex's airship plays a much larger role in the game. It serves as transportation to reach the Academy of Evil when the Psychetron malfunctions and Cortex requires his niece to fix it. Inside, they are ambushed by the Evil Twins and their Ant Drones before reaching the Academy.

As Cortex meets up with Crash in Classroom Chaos, the mad scientist orders him to tie the airship's rope to something secure while he gets his niece. A school bus proves to be not secure enough, as the ship floats off, carrying it. In Rooftop Rampage, Nina goes after the loose airship only to be chased by it before it can finally be secured.

The airship can always be seen in the Academy of Evil and the Iceberg Lab, attached by a rope. This version of the ship has a gun attached.

Cortex arrives in his airship in the intro with an entirely different model, and he captures Coco and Aku Aku with cages and freezes Crunch with a freeze ray from a cannon. He carries off with Aku Aku and Coco, but Crash throws Coco's butter recycling device at Aku Aku's chain that is connected to his cage, thus severing the chain and freeing him. Later, Cortex uses a mojo pumping device from the airship to steal the mojo from the Mojo Temple.

The airship appears in one of the unlockable concept art packs, in a fan-made drawing of the islands. Its old variant can be seen attached to what appears to be the Iceberg Lab.﻿

One of the mini-games involves Crash running down a path kicking balls at Cortex's airship for points.

Cortex's airship first reappears in the 11th Dimension, where the mad scientist moored it near to his current base atop the frosty mountain. He escapes to it as Crash chases him at the end of Bears Repeating. He then uses the airship's newly-equipped weapon on the top bridge to battle Crash.

Later, the airship reappears in the Sn@xx Dimension, but is used to transport luggages at the top of a towering hotel in Neon City. Cortex hijacks it in The Crate Escape when he changes plans to use Kupuna-Wa to travel back to the past and keep his past-self from failing Crash's brainwashing. He then pilots the airship into a giant time rift, Crash and Coco barely hanging on to it.

Back in 1996, Cortex moored the airship to his castle in order to infiltrate it. Eventually, his past self would come to appropriate it for his own uses.

Concept art of Cortex's airship in front of the moon above Cortex Island.

Cortex falling from the ship at the beginning of Cortex Strikes Back. 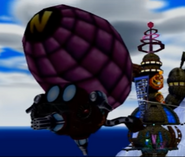 The airship in Crash Twinsanity next to the Iceberg Lab.

A framed picture of the airship in the Iceberg Lab.

Concept art of the airship's bridge in Crash Twinsanity.

Earlier concept art of the bridge in Twinsanity.

Cortex's airship in Crash of the Titans. 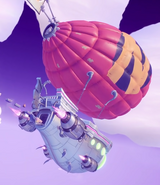 The airship in It's About Time.
Crash Bandicoot
Cortex Strikes Back
Crash Bandicoot: Warped
Crash Bandicoot: The Huge Adventure
Crash Twinsanity
Crash of the Titans
Crash: Mind Over Mutant
Italiano
Community content is available under CC-BY-SA unless otherwise noted.
Advertisement