In N-Tranced, Crash gets the copter pack from copter crates in four of the volcanic levels (Magma Mania, Mister Lava Lava, Eruption Disruption and Fire Walker), but Crash starts the boss fight against Evil Coco, as well as the second phase of N. Trance's boss battle with it already equipped.

In Crash Bandicoot Purple: Ripto's Rampage, a sprite of Crash using the copter pack appears as a Trading Card.

Its controls are similar to the jet pack, moving the analogue stick or d-pad to a direction would make Crash go into that direction.  On the PlayStation 2,

moves him backwards (towards the camera) and 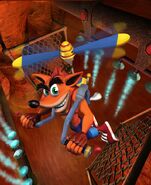 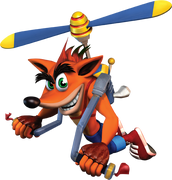 Crash using the Copter Pack in The Wrath of Cortex. 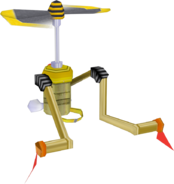 Copter Pack in The Wrath of Cortex.

Sprite of Crash using the Copter Pack in Crash Bandicoot Purple: Ripto's Rampage.
Crash Bandicoot: The Wrath of Cortex
Crash Bandicoot 2: N-Tranced
Expansion required
This article is too short to provide more than rudimentary information about the subject. You can help the Crash Bandicoot Wiki by expanding it.
Русский
Community content is available under CC-BY-SA unless otherwise noted.
Advertisement