Bandipedia
Register
Don't have an account?
Sign In
Advertisement
in: Crash Bandicoot: The Wrath of Cortex, Levels, Mechanical Levels,
and 3 more
English

Rumble in the Roks
Compactor Reactor is the fifth level and the last level of the first warp room in Crash Bandicoot: The Wrath of Cortex. The level is set in a nuclear reactor owned by Dr. Cortex and is the first level in which Crash rides in a minecart. For the second gem, the yellow gem must first be obtained from Gold Rush.

Of the four main elemental factories, this factory represents the element of earth as it takes place in a mine that is accessed through minecarts.

The level initiates outside in a dig site (the exact location of this dig site is unknown, but if one examines the environment, it's possible to see that the dig site is located on a small volcanic island) with a minecart section, where the minecart tracks lead to the entrance of the factory. At two points before the factory entrance, the minecart tracks deviate, and in both cases, there is only one path viable for breaking all of the crates to obtain one of the clear gems. At the beginning of the section, there is an alternate, and more difficult minecart route, which bears a blockage and leads to the other clear gem. This path may only be accessed if the player has obtained the yellow gem.

Entering the nuclear reactor, there are various hazards and enemies, such as lab assistants in lab coats that pitch chemical-filled vials and other lab assistants that wear what appear to be hazmat suits and spray radioactive chemicals, in addition to massive screws that screw either vertically or horizontally, flaming boulders on conveyor belts on their way to a grinder, pressure crushers, and strange screw-like beams as well as laser beams. The level concludes with a large conveyor belt that is strewn with laser beams and leads to the portal.

The player can influence the speed and balance of the minecart Crash rides in by tilting the control stick or using the directional pad. 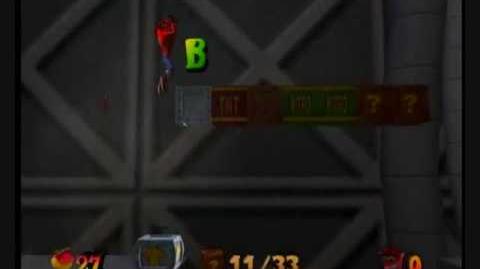 If you go to the very right of the level when you start it, you will see a fourth tree that no gamer even bothers to see

Crash crawling under a laser

Crash inside the nuclear reactor

Where Crash Bandicoot was originally going to start the level