Coco Park is the fifth race course in Crash Team Racing and Crash Team Racing Nitro-Fueled. As its name suggests, it is Coco Bandicoot's home track. It appears in the Green Gem Cup (which includes Roo's Tubes, Polar Pass and Cortex Castle) and the Wumpa Cup.

The course is surrounded by hills mostly covered in lines of red, yellow and white flowers. There are large, pink statues dotted along the sides along with a single, snow-covered mountain which can be driven through. There are various hedges cut along the side of the course differing in height. At the finish line, there is a stadium facing a pond and a mural of Coco on the opposite side of the track.

The track received an extensive overhaul in the Nitro-Fueled remake. An abundance of flower petals are spread all over the track, with fountains constantly spraying more in every direction. Various plants suspended by propellers can be seen floating above the track. There are four giant stone statues of Coco herself on the sides of the track, each in a different pose. Behind the starting line on the sidelines, a renaissance fair similar to the Medieval stages of Crash Bandicoot: Warped can be seen, with enemies from the level cheering. Many scientists can be seen cheering along the walkway of a winner's circle on the sideline. And lastly, a fairy tale-themed castle can be seen at the distance.

The track starts with a straight before gently curving to the left. There is another brief straight section before turning around a hill to the left, with a boost pad in the middle of the turn. A shortcut is possible if racers go up the hill, cutting the corner. Racers then go uphill through a small tunnel before going downhill again and taking another left turn. There's another small hill and another short turn to the left before reaching the finish line, with two boost pads found in this area. 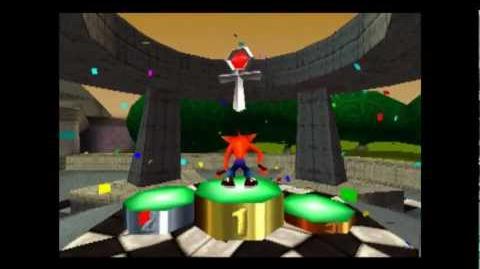 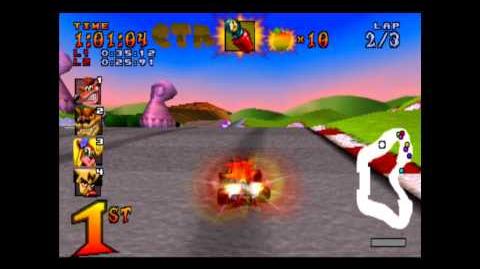 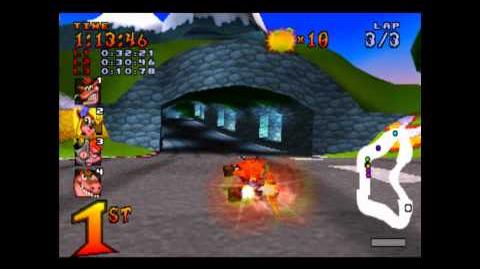 Crash racing a Ghost of N. Tropy on Coco Park