Bandipedia
Register
Don't have an account?
Sign In
Advertisement
in: Crash Bandicoot: On the Run!, Places, Warp Room

Coco's Base is an area on Wumpa Island in Crash Bandicoot: On the Run!, formerly serving as the main menu. From there, Crash and Coco Bandicoot can select missions, craft ingredients and weapons or travel to previously unlocked areas for collecting ingredients or take on challenges.

The Mission Computer displays the various gangs deployed by Neo Cortex. Crash and Coco can only warp to a henchman or a boss if they have enough of the required Portal Weapons to fight them. New gangs appear after earning a certain amount of Power gems.

Several buildings in Coco's Base are used to store ingredients and use them to hatch eggs or craft Portal Weapons. They all require Parts or Purple Crystals to be upgraded, although the Lab and Chicken Coop upgrades also need sufficient Power Gems.

The four labs are where Coco crafts Portal Weapons with Ingredients stored in the Silo. Crafting Portal Weapons takes time and can be sped up with Purple Crystals.

Each lab is unlocked progressively with Power Gems and feature three slots for weapons. The first slot is always unlocked by default, while the other two are respectively unlocked with Parts and Purple Crystals. Lab upgrades are also tied to obtaining Power Gems, with each level allowing the crafting of more complex Portal Weapons, and require Parts to be built.

Chicken Coops are used to hatch eggs in exchange of feeding the Mutagen Chickens with the proper Ingredients. Eggs are then stored in the Silo and can be spent on crafting advanced Portal Weapons. Hatching eggs takes time and can be sped up with Purple Crystals.

Up to 3 different coops can be unlocked progressively with Power Gems, with up to 3 slots each for Mutagen Chickens. The first slot is always unlocked by default, while the other two are unlocked with Parts and Purple Crystals. Chicken Coop upgrades are also tied to obtaining Power Gems, with each level allowing the crafting of one more type of egg, and require Parts to be built.

The Silo serves as reserve for crafting Items such as Ingredients and Farming Items (eggs). It also stores collected Parts. It starts with a limit of 250 items, although it can be upgraded with Parts by increment of 50 for a better capacity, up to 1200 items. Unlike the labs and coops, those upgrades are not directly tied to obtaining Power Gems, but Delta Parts and Omega Parts can only be respectively obtained for the first time in the levels Snow Go and Road to Ruin, unlocked at 75

The lightbulb on the Silo and its menu turns orange when the building is nearing capacity and red when it has reached its limit. A Silo can have its limit breached but will not accept any more Item when that happens, unless obtained from Challenge Run and the Vending Machine. Items from the Silo can be spent on crafting stations, building upgrades or sold for Wumpa Fruits.

The pile of crates next to the Silo shows how many Wumpa Fruits Crash and Coco have collected. They can be spent on crafting Portal Weapons or converted into Trophies at the Tiki Head.

The Vending Machine is an in-game shop similar to the Pit Stop in Nitro-Fueled, where the player can claim free weapons and ingredients daily after watching an ad. It also features daily deals: character skins and ingredients rotating daily and which can be bought with Crystals. Finally, Crystals can be purchased with real money as a form of micro-transaction.

Note that Ingredients and Weapons only appear in the Vending Machine after they are unlocked through story progression. Some skins also only appear after their corresponding bundles have showed up once and gone.

Several buildings in Coco's Base are directly related to Seasons, with some of them only turning active during specific events.

The Season Event Area is a dock on the shore of Coco's Base where a different pontoon is moored when a Season is taking place. Selecting it displays the various events and rewards for the current Season. It is unlocked after and remains empty until acquiring 10

, even during a Season. 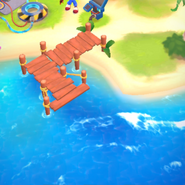 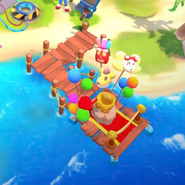 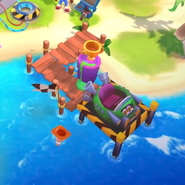 The Return of Nitros Oxide! 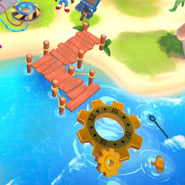 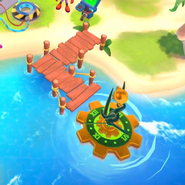 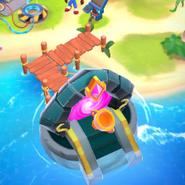 Teaser for Battle of the Dragons 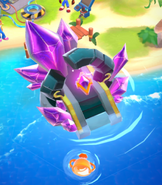 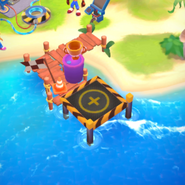 Teaser for Survival of the Fastest 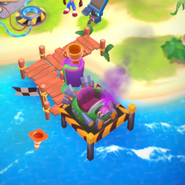 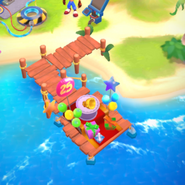 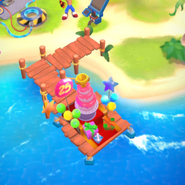 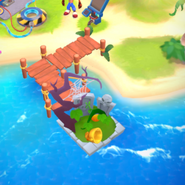 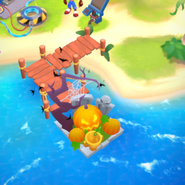 The Trophy Stand displays how many Trophies Crash and Coco have currently collected. During a break between events, the stand appears unplugged and unlit, and only displays Trophies to be redeemed for the coming Season. During an event and when the player is in a team, it appears plugged in and displays the current Trophy count as well as the rewards for the current Season's Team Leaderboards. It lights up progressively as Crash and Coco collect Trophies. 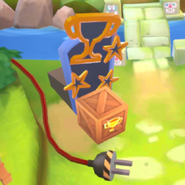 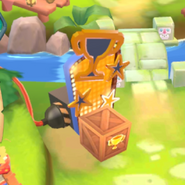 The Stand at 5000 Trophies and above. 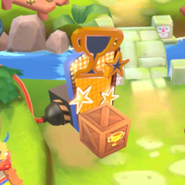 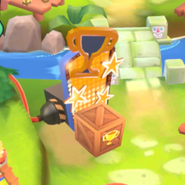 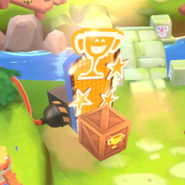 The Tiki Head can be fed Wumpa Fruits and Steps and convert them into Trophies for the current Season. It is unlocked after acquiring 11

The Mission Board allows players to claim Mojo and Trophies in exchange for Ingredients, Eggs and Portal Weapons. During Seasons, missions appear once a week, and stay active for only 4 days or until the Mojo gauge has been filled out.

Aku Aku's Quests appear once daily and refresh every day at the same hour if the quests from the day before have already been cleared. Each day proposes 3 quests of different types. Besides the first quests during the game's tutorial, completing the 3 daily quests rewards 5

Early concept art of Coco's Base.

Concept art of Coco's Base.

Concept art of the Mission Computer.

Concept art of the Nitro Lab.

Concept art of the Frosty Lab.

Concept art of the Inferno Lab.

Concept art of the Oxide Lab.

Concept art of the Silo.

Concept art of a chicken coop.
Community content is available under CC-BY-SA unless otherwise noted.
Advertisement