Thunder Struck
Clockwork Wumpa is the second race course in Fenomena and the eighth race track in Crash Nitro Kart. There are two giant gears that try to squash the player, along with two shortcuts in this race, one of them is three gears that you hop on, the second is a ramp that gets the player to a platform. There is one trap in this race, an activation crate that activates a giant trap door.

Pictures of Norm can be seen on windows of the track. It is a difficult track for most players because there are no big shortcuts, several tight corners, and numerous obstacles the player has to avoid. It is used in the Nitro Cup and the Blue Gem Cup (along with Barin Ruins and Electron Avenue).

The Castle course in the mobile version of Crash Nitro Kart is based off of this course.

This track later returned in Crash Team Racing Nitro-Fueled. The track is set during winter on Fenomena, with the addition of snowfall which has visibly built up on some spots on the track.

The race track has a lot of clocks and a trapdoor is set if a racer activates the "!" crate to trap opponents down there. Two giant gears try to squash the player and there are two shortcuts in the race, one is the three gears that the player hops on and a second one is a ramp that launches the player onto a platform.

N. Gin jumping into the main tower in CNK.

N. Gin racing on the track in CNK 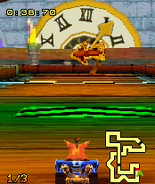 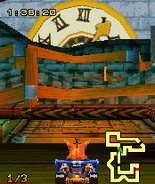 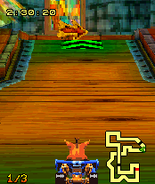 Dingodile and Crash slide past the Wumpa barrels in Nitro-Fueled.

Dingodile, Coco and Polar approach the big drop in Nitro-Fueled.

A view of the gear shortcut in Nitro-Fueled.

Ripper Roo in front of a stained glass window in Nitro-Fueled.

Ripper Roo boosting past a gear in Nitro-Fueled.