Rooftop Rampage
Classroom Chaos is the eighth level in Crash Twinsanity, the second in the Academy of Evil.

It is the only stage where Cortex goes solo for part of the level. It continues on from Boiler Room Doom. The level is very easy for collecting Gems, as they are all pretty much on the main path. Next to Ant Agony and Totem Hokum, it is considered one of the longest levels in the game. The level starts off as Crash. The player must make their way through several corridors and classrooms and at one point outside where three Guard Dogs await. In certain corridors, there are Hall Monitors which Crash has to hide from, similarly to the Tribesmen in Totem Hokum, looking out for intruders. Eventually, Crash makes it to a library that is filling up fast with green acid, possibly from the underground boiler room. Crash has to make it to the top before he is killed by it.

In the next segment, the player takes control of Cortex, who takes over and tells Crash to go back to the Airship and tie its ropes to something secure. Like Crash, he has to make his way through classrooms and corridors to reach Nina's dormitory. He uses his Ray Gun to deal with Robot Dummies and monstrous Robotic Janitors, for which he has to ring a bell and students run out trampling it. In certain corridors, Cortex will be chased by scarabs and in certain classrooms, Cortex will have to defeat test frogs and mice to progress.

Blue gem: Not long after the first hall monitor in Crash's section, you'll reach a room with falling platforms above a bottomless pit. The blue gem is off on the left side of the room.

Clear gem: When you reach the courtyard in Crash's section, activate the ! crate on the left, next to the fence. This will make bouncy crates appear on the right, next to the door that leads to the next part of the level. Bounce on these to reach the gem.

Green gem: The green gem is pretty hard to miss. It's in the middle of the path at the end of the rising acid section in the library.

Purple gem: The purple gem is also pretty much impossible to miss. It's in Cortex's section, not long after the bug chase segment, over an acid pool in a corridor. You collect it while using a floating platform to pull yourself across.

Red gem: Towards the end of the first corridor in Cortex's section, the red gem is in clear view, surrounded by nitro crates just past the platform that lifts you to the next section. Shoot the nitro crates to clear them, walk around the platform and grab the gem.

Yellow gem: The yellow gem is in the middle of the path after the second FrogNstein horde room. Shoot the TNT crates surrounding it and grab it. 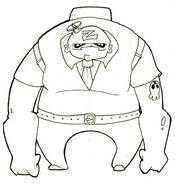 Concept art of a student visible in this level.

Concept art of a cut idea from this level. 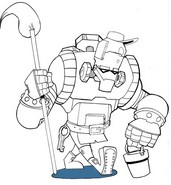 Concept art of the Robot Janitors visible in this level.