Citadel City is the fourth hub in Crash Team Racing. It is also the final secondary hub world in the game. The boss for Citadel City is Pinstripe Potoroo, who can be challenged once all sixteen trophies are collected before the player faces Nitros Oxide.

On the lower level inside of the castle, N. Gin Labs is located in the corner near the entrance/exit ramp. Also on the lower level, Cortex Castle can be found in front of some stained-glass portraits. There is a wooden spiral ramp which leads to the upper level of the castle. On the deck, Pinstripe's challenge, and his home track Hot Air Skyway, can be found across from each other. On the other side of the castle hallway is Oxide's space station, where the track Oxide Station is housed. 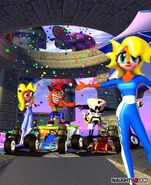 A trophy presentation in Citadel City.

Stained glass of the boss characters from Crash Bandicoot 3: Warped.

The Podium in Nitro-Fueled.