Passive
Chickens are creatures that appear throughout select games in the Crash Bandicoot series.

This game was the first Crash title that Chickens appeared in. They can be found in the Medieval levels, where they flee if Crash comes too close. However, they can be defeated by shooting them with the Fruit Bazooka; they will then burst into feathers.

The chickens can be found in Crash Twinsanity in the first level, where they come out of a chicken coop in fencing packed with Nitro Crates. Like the chickens that appeared in Crash Bandicoot: Warped, they will run away if Crash comes too close. Crash can chase them into the Nitro crates, causing them to explode and enables him to obtain the gem on a ledge above the coop.

They are encountered again after the player gets out of Cavern Catastrophe, in a large group on a beach. After this appearance, they can be later be found at Farmer Ernest's farm, in a flock. They are last seen in Slip Slide Icecapades, where Crash and Cortex slide into a chicken-serving restaurant, under the name Cortez, and three are standing in the back; they can be hit by being slid into, knocking them into the surrounding pit.

Chickens play a major role in this game and have many various appearances in the game, with two mutant chickens named Chick and Stew being main characters. In each area (except the Midway), Crash can find a chicken in a hidden location and choose a mission to collect all the chickens throughout the area, which is called a Chicken Challenge. They are seen in two Die-O-Ramas: in Poultry's Revenge, Crash puts one of these chickens into a cannon and turns around, crouches down, and plugs his ears, only to have the chicken fly out the back and turn the cannon around and shoots Crash. In Crash Cubes, Crash throws a chicken into an ice making machine and it pops out, encased in an ice cube, only to have Crash sucked in.

The chickens are seen in the intro, where Cortex, Nina and N. Gin are chasing Crash, Crunch, and Coco in cars when Coco throws two chickens behind their car and they hit Cortex. They are also seen in the ending, when Crash throws a chicken into the turbine of Cortex's spaceship, shredding it into feathers, causing the spaceship to malfunction. They are also targets in a bird-shooting mini-game, and Crash takes one out of his pocket to kill in suspended animation. In addition to this, they appear as bomb-style weapons used by the driver of a car during races. The chickens in this game bear a striking resemblance to the ones from Twinsanity, but with dotted eyes and ruffled feathers.

﻿Chickens appear as exploding projectiles in this game in co-op mode while one player is in mask form and can be fired from the backpack.

Chickens reappear in the N. Sane Trilogy remaster of the third game where they reprise the same role they had in the original version of the third game. Shooting five chickens with the Bazooka in a single level will unlock the Trigger Clicking Good achievement.

Chickens are used as a running gag by the developers, Beenox: 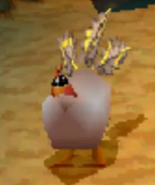 A Chicken in Warped.

A Chicken in Twinsanity.

Concept art of Crash and Cortex humiliskating through a henhouse from Twinsanity.

Crash with a Chicken in CTTR.

T-Rex Chicken Head sticker
Add a photo to this gallery

Retrieved from "https://crashbandicoot.fandom.com/wiki/Chicken?oldid=193531"
Community content is available under CC-BY-SA unless otherwise noted.