The level takes place after Mecha-Bandicoot has been defeated, and is the first level to feature rollerbrawling. It also contains the first crystal in the game.

The level also features an exclusive gameplay feature: colorful crystal clusters that Crash and Cortex must roll into or spin in order to make rocks fall from the cave ceiling, which aids their progress.

The level also includes a battle against the Ant Drones, where Crash must body-slam buttons to shut down their drill probe. Later on, Crash and Cortex must climb out of the mines while pursued by the Ants' drill vehicle. A common hazard are Nitro Crates which are placed in stacks along the mine tracks. Also of note is the inclusion of two Nitro Switch Crates in this level, which appear nowhere else in the game. Their function is to blow up distant Nitro Crates rather than destroying all of them.

Yellow Gem: When you reach the second tunnel you will see two paths: One looks completely normal and the other have a wooden barricade with a skull shape in it. Go to the skull barricade path and at the end of it, the gem will be there.

Green Gem: After going through the yellow gem's tunnel, the path will fork. The green gem is found on the path going right.

Purple Gem: When you reach a section full of spinning wheels, keep going forward until you see two X-marked trapdoors. Step on them and wait until you fall, and you will reach the area where the gem is.

Blue Gem: After reaching a section full of N switches, you will see in the distance a wooden platform with some rats and the gem. You can't reach it with Crash but if you throw Cortex there he kills the rats and grabs the gem before teleporting back.

Red Gem: When you're close to the ending of the Drill Chase, there will be a small wooden platform with the gem on it. Quickly grab it and return to the elevator before the drill reaches you.

The exit of Cavern Catastrophe.

Concept art of the scene where Cortex finds the crystal. 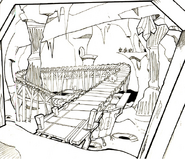 Concept art of the level, featuring a conveyor belt not seen in the final. 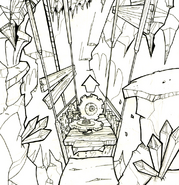 Concept art featuring the lifts used in the level.

Concept art of some scenery in the level.
Add a photo to this gallery