Carbon Crash is a clone of Crash created by Cortex. Carbon Crash only appears in Crash of the Titans and in Crash: Mind Over Mutant as the second player, replacing Coco. He and Crash are completely identical except that Carbon Crash has white fur, turquoise tattoos, black hair, green shorts and brown All-Stars. However, in the PS2 version of Mind Over Mutant, his tattoos and hair are light grey.

As seen in "Have Another", Carbon Crash was created by Cortex using the cloning machine called the Make-Another-Ator on a captured Crash, in order to defeat him with an army of "him". For an initial test, Cortex ordered Nina to use the Arachnina on him, though while doing so she ends up cutting through Crash's cage and freeing him. The two bandicoots start to fight, but when they bump into Cortex and the Make-Another-Ator falls, it clones both Crash and Carbon Crash, resulting in the creation of 18 colored Crash clones, who join up and defeat Arachnina by knocking it down, forcing Cortex and Nina to flee. Crash reunites the clones and is about to 'make-less' them, but after seeing all of them making sad faces, they end up relaxing at the beach, with Crash cloning wumpa fruit with the Make-Another-Ator for Carbon Crash. 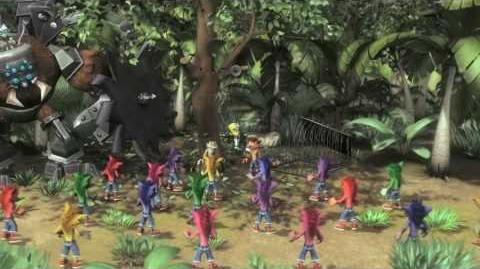 Crash Bandicoot - Have Another
Add a photo to this gallery

Carbon Crash is seen as the second player. He has no connection to the story, however, he can be very helpful in some levels. Like Crash, Carbon Crash has costumes, and just as they have different color schemes, their costumes have as well. While in co-op mode, they can jump in and out of each other's backpack in order to progress certain areas with ease.

In Crash: Mind Over Mutant, he plays the same role as he did in Crash of the Titans. However, he is replaced by Coco in the Xbox 360 and Wii versions of the game, and appears as a skin for her. For 100% completion of the game, the player needs to use him in some optional co-op missions, unless the player is skilled enough to complete the missions on their own.

Carbon Crash is able to perform every move Crash can. In Mind Over Mutant's co-op mode, both of them are able to turn into a mask, similar to Aku Aku, and then shoot chickens that explode on contact with enemies, walls, or the ground. 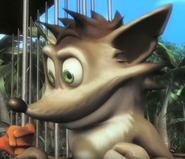 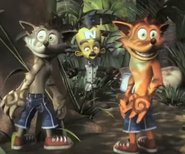