The bonus rounds that appear in the original Crash Bandicoot are triggered by collecting three different types of character tokens: Tawna, N. Brio, and Cortex tokens. In order to activate the bonus round, Crash must collect all three tokens for one of these characters in a single level to access it. The tokens can either be found lying around in the level or hidden inside of crates. Once Crash collects all three tokens of a certain character in a level, he will be transported to their respective bonus round area where he will be able to break crates and gain extra lives. He will be able to save in certain bonus rounds by going onto a transport pad. The bonus rounds do not affect the total amount of crates Crash must collect in a level.

In Crash Bandicoot N. Sane Trilogy, the mechanics of the bonus rounds have been altered to be closer to later games in the series. Collecting three tokens doesn't warp Crash instantly to their corresponding bonus round, but instead opens a portal near where the final token of a level is located. Said portal remains open until the round is won, even if Crash fails the bonus level, making the bonus round much more forgiving as players have as many tries as they need to complete them. Also, the bonus rounds' crates are now necessary to break in order to obtain a level's gem. In the case of levels with colored gems, failing bonus rounds doesn't count as a death in the level, so players may fail a bonus round as often as needed with no penalties.

The bonus rounds that appear in Crash Bandicoot 2: Cortex Strikes Back and later installments are all accessed by a special platform in a level. When Crash utilizes the platform, he will fall, be teleported or transported to a special section of a level that is similar to the level or warp room's theme. In these bonus rounds, Crash can collect additional Wumpa Fruit, lives, and smashed crate tallies. Crash must collect the crates in the bonus round in order to collect the clear gem at the end of the level. If Crash dies in a bonus round, he will be allowed to retry it as many times as desired without losing a life. Crash will occasionally have to perform special techniques and tasks in later bonus rounds, an idea beginning in Crash Bandicoot: Warped. Unlike the previous bonus round style, the one used in Cortex Strikes Back and in Warped displays the Wumpa Fruit, life, and smashed crate tallies at the bottom at all times, only added to the main tallies after the bonus round is complete. When the player exceeds 100 Wumpa Fruit in a bonus round, instead of a cyclical tally with a life being obtained after every one hundred fruit, the Wumpa Fruit tally will just continue to add up until the round is complete.

The bonus rounds that appear in Crash Team Racing and Crash Nitro Kart are accessed by beating an area's boss. To enter the bonus round, all the player has to do is drive onto a purple warp platform. The bonus round requires the player to collect all 20 crystals before the time runs out. If successful, the player earns a purple CTR or CNK token. These levels in CTR include Skull Rock in the N. Sanity Beach area, Rampage Ruins in The Lost Ruins area, Rocky Road in the Glacier Park area, and Nitro Court in Citadel City. In CNK, they are Temple Turmoil in Terra, Frozen Frenzy in Barin, Desert Storm in Fenomena, and Magnetic Mayhem in Teknee.

The end of a N. Brio's Bonus Round in Crash Bandicoot.

The end of a Cortex's bonus round.

A Bonus Round in Crash Bandicoot: Warped.

A Bonus Round in Crash Bandicoot: The Wrath of Cortex.

A Coco Bonus Round in Crash Bandicoot The Wrath of Cortex. 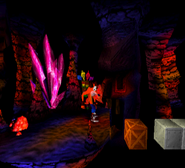 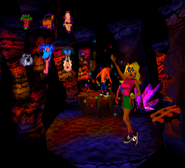 Retrieved from "https://crashbandicoot.fandom.com/wiki/Bonus_Round?oldid=219635"
Community content is available under CC-BY-SA unless otherwise noted.