Bombs are hazards found in Makin' Waves, Tell No Tales, Ski Crazed, and Hot Coco. If Coco touches one, she will lose an Aku Aku if she has one, or a life if she doesn't. They have a picture of a skull on them. Bombs are either shot out of a pirate ship, rolling across the water as obstacles, or found already in the water, bobbing in place or moving from side to side.

Bombs are items in races. They can be launched forwards or backwards, and explode upon hitting anything, or the user pressing the item button again. The explosion spins out karts, and the explosion is bigger if the user is juiced up (has 10 Wumpa Fruit). These bombs are called bowling bombs.

Bombs appear in some Tank Wars. Unlike the player's regular attack, they fly over walls and are useful for far away opponents. They also deal much more damage than regular attacks.  They are also found in Manic Panic, in which a player loses his/her polar bear when attacked by a bomb the first time, and then dies if attacked by a bomb the second time.

Bombs are shot out of cannons on N. Sanity Beach and in Jungle Bungle in order to destroy tiki statues and get gems. When about to explode, they blink red. These bombs also possess Cortex's "N" insignia. Cortex also uses these bombs in his boss fight, where they destroy the outer sections of the platform Crash is standing on. In the game's beta, in Cavern Catastrophe's gear area before Cortex finds the crystal, infinite amounts of bombs would drop from a waterwheel down the gears, posing a deadly threat to Crash and Cortex.

In Bandicoot Pursuit and Ant Agony, red energon spheres function identically to bombs. They are used either to obtain gems, or to clear a path for Cortex while Evil Crash is chasing him.

Chickens are used as bombs during races, where they deal low levels of damage. Von Clutch's clashed weapon, Radioactive Bomblets, is also a bomb seen in races. Several bombs can be seen in the pile-up of explosives in the Die-O-Rama "The Big Bang Theory".

Bombs reappear in the N. Sane Trilogy remake of the third game, where they reprise their role from the original version of the game.

In It's About Time, bombs are used as projectiles by a certain variety of enemy known as Berserk Bombers.

A bomb from Crash Bandicoot: Warped.

A bomb from Warped.

A bomb from Crash Bash.

A bomb from Crash Bash. 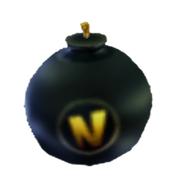 A bomb from Crash Twinsanity.

A 10th-dimension bomb from Crash Twinsanity. 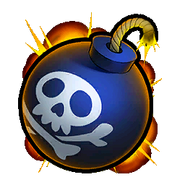 Concept art of a Berserk Bomber throwing a bomb from It's About Time.

A bomb on the illustration on the inside of the cover of The Art of Crash Bandicoot 4: It's About Time.