In Crash Bandicoot, blobs can first be seen in N. Brio's boss fight. Brio creates them by throwing beakers to attack Crash, and they must be jumped on to defeat them, which hurts Brio.

Smaller, yellow variants of blobs can also be found as regular enemies in The Lab, which can be defeated with a spin or just by jumping on them.

Blobs reprise their original role from Crash Bandicoot in the N. Sane Trilogy remake. Rather than being round featureless balls of slime, they now have distinct mouths and glowing red eyes. The yellow variant no longer exists, with the regular green variant being used instead.

Blobs cameo in Nitro-Fueled, appearing in the background of some tracks. A blob can be seen above the starting line in Sewer Speedway and just before the high-speed tunnel in N. Gin Labs.

Blobs are used once more in N. Brio's boss fight, with the same role they had in Crash Bandicoot. When created, they chase the player character around and lunge at them when they get close. Spinning them or jumping on their heads hurts Brio.

A different type of blob appears in Nitro Processing. These are round and covered in appendages with which they move around. Some travel in a set path, some move in circles and some are completely stationary. They cannot be defeated with any attack; touching one kills both the blob and the player character. A blob that reaches the end of its path (if it has one) will explode.

Blobs appear in The Lab in On the Run!. There is a small variant which takes up one lane and crawls towards the player, and a larger variant which takes up two lanes and sits still. They are immune to normal attacks, however they can be bounced on to reach higher areas or killed by throwing a Boom Berry at them. Lab Assistants summon small blobs during their mini boss fights, which can pick up and carry TNT crates on their heads by running into them. 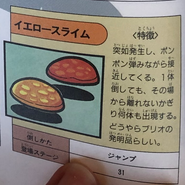 A yellow blob as seen in The Lab.

A green blob from the Crash Bandicoot N. Sane Trilogy.

A blob on the illustration on the inside of the cover of The Art of Crash Bandicoot 4: It's About Time.