Blizzard Bluff is the ninth race course in Crash Team Racing and Crash Team Racing Nitro-Fueled. It, like Polar Pass and The North Bowl, is based on the snow-themed levels of Crash Bandicoot 2: Cortex Strikes Back. In adventure mode, it can be found in Glacier Park and is in the Red Gem Cup (with Crash Cove, Mystery Caves and Papu's Pyramid) and the Wumpa Cup. It is the home track of Penta Penguin.

This track takes place in the snowy mountains, with bumpy terrain and frozen lakes making massive patches of slippy ice. In Nitro-Fueled, the track is styled to look like a ski lodge, with cabins on the side of the track at times and many penguins skiing, ice-skating, spectating the race and just enjoying the winter weather. A giant snow statue of Penta Penguin can also be seen in the background of the track's starting area.

The track begins with brief straight before curving around to the left around a rock formation. Racers can also cut under the overhang here for a small shortcut. The road then turns to the right before curving to the left again, descending down a sequence of short cliffs, like giant steps. The track continues to curve left with a boost pad before encountering a boulder that rolls back and forth across the track, crushing any racers caught underneath. After the boulder is a short series of ridges before emerging onto a frozen lake.

The standard path here is to veer slightly to the right to rejoin the main road before turning left to cross the bridge. Racers then turn right before taking a big curve to the left before turning right over more ridges, then proceeding forwards over another ice lake back to the finish line.

Alternatively, beginning back at the first frozen lake, two shortcuts are available. The first is achieved by going to the left and leaping over the river, which is only possible with sacred fire active. The next involves jumping up the hill and hopping over the fence to cut a massive corner, which also requires sacred fire and perfect timing with your hops. 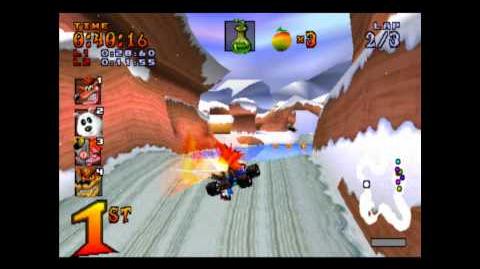 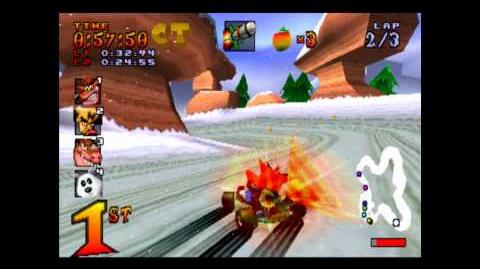 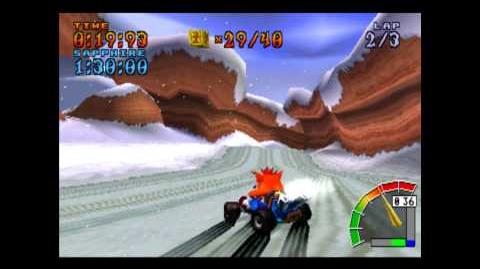 Cortex, Crash and Coco racing on the track

The Switch version of the previous image.