Hostile
Bees are enemies that appear in Crash Bandicoot 2: Cortex Strikes Back, Crash Twinsanity, and the N. Sane Trilogy remake of the second game. They live inside striped beehives and come out in small swarms to chase Crash whenever he passes by. The bees can be defeated by a spin attack, but the beehives cannot.

Even though bees can be defeated, it is best to avoid them because of their unpredictable patterns and number. The only way to avoid these enemies is to just move out of the area near their beehive, or hide underground when possible. If the player is able to outrun them or hide inside specific patches of ground, the bees will return back to the beehive. However they will attack again if the player goes back to their territory.

The bees make a brief return in Crash Twinsanity in the level Totem Hokum, where at first, Cortex is attacked by a swarm of bees. Soon after, a beehive falls on his head and gets stuck. In this game the bees have a more simple design, probably due to the limitation of the console and the much higher number of them on the screen at once. The yellow on their bodies is also lighter and they seem to not have a clear face.

A Honeybee in Crash Bandicoot 2: Cortex Strikes Back.

A swarm of Honeybees in Cortex Strikes Back 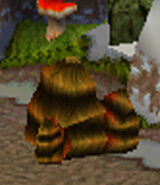 Doctor Neo Cortex gets attacked by Bumblebees in Crash Twinsanity.

Cortex gets attacked by Bumblebees in Twinsanity. 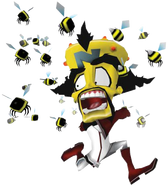 Cortex gets attacked by Bumblebees in Twinsanity.
Add a photo to this gallery

Names in the languages