Bearminator is the second boss fight in Crash Bash. To enter it, the player must have at least nine trophies, six gems, and three crystals. The boss takes three hits to defeat and shoots mechanical bears that player must charge off of the metal tilting platform in order to defeat them. After all mechanical bears are thrown off, a missile will appear in the middle of the platform, which players can pick up and use to lock on and shoot at the bear. Every time the bear is hit or the player misses a shot, it will destroy a section of the platform by launching a bomb from the submarine. Every time the boss is hit, an extra mechanical bear will be thrown onto the platform and after three hits the boss is defeated. If the player is knocked off the platform then the bear will point and laugh.

If the player fails the boss fight too many times, mechanical bears will start to bounce off of the platform after being shot out of the bear's submarine. 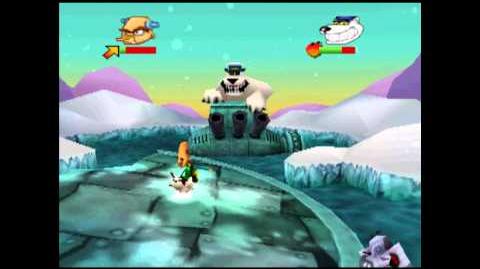 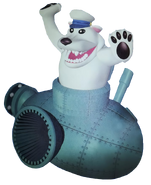 A Japanese render of the Bearminator boss.

A comic strip from a Japanese strategy guide portraying Crash and Coco in this boss fight.