A Bear is seen in Crash Twinsanity chasing Cortex in the third and final segment of Totem Hokum's Doc Amok. The bear chases Cortex because of the beehive stuck on his head. If Cortex is killed, the bear will start licking the beehive. The bear will drop off halfway through the segment.

The bear cannot harm the player and can be stood on temporarily. Halfway through the bear's segment, the bear will turn completely around and start heading back. The bear, unlike most enemies, has the ability to run over water and continue running until it gets stuck. The bear cannot be interacted with the spike crusher, though in the demo if it is dropped on the bear, the bear will actually kill Cortex. This can also sometimes happen as a glitch in the full game. 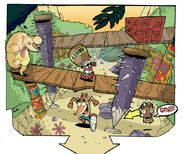 Concept art of the bear chasing Cortex.
Add a photo to this gallery
Crash Twinsanity
Retrieved from "https://crashbandicoot.fandom.com/wiki/Bear?oldid=182462"
Community content is available under CC-BY-SA unless otherwise noted.