A Beaker-Throwing Lab Assistant (Japanese: ドッカン研究員、フラスコ研究員) is a variation of the lab assistant that appears in three games in the series.

Beaker-Throwing Lab Assistants make their debut in Crash Bandicoot, in the levels Slippery Climb and The Lab. As their name suggests, they attack by throwing beakers full of non-descript pink liquid at Crash. They can be defeated by spinning them or jumping on their heads.

They are again seen reusing their classic beaker-throwing attacks. Some retain the original lab assistant look, while others don new black coats and sunglasses. These lab assistants will always throw in one direction, rather than throwing beakers in the direction Crash goes. These assistants appear in the levels Compactor Reactor, H2 Oh No, Fahrenheit Frenzy and Cortex Vortex.

They reprise their original role from Crash Bandicoot, as well as appearing in the newly-restored cut level, Stormy Ascent.

Beaker-Throwing Lab Assistants appear as a henchman in On the Run!, where they are simply referred to as Lab Assistants. They attack by throwing serums to summon Blobs, which attack the player, sometimes picking up Nitro Crates on their heads by running into them. Like all henchmen, Lab Assistants are defeated by simply avoiding obstacles to reach them and using the Portal Weapons crafted beforehand to send them back to their own dimension. 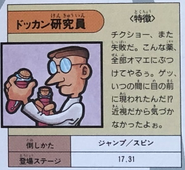 A Beaker Throwing Lab Assistant in Crash Bandicoot: The Wrath of Cortex.

A Beaker Throwing Lab Assistant in The Wrath of Cortex.