Bandipedia
Register
Don't have an account?
Sign In
Advertisement
in: Crash Mind Over Mutant, Titans, Crash of the Titans,
and 3 more
English

Kung-Fu razor claw combos and the power of explosive wind! Hmm... Something funny about that last sentence.

Battler is a mutated bat titan whose appearance differs between games. In Crash of the Titans, it is dark-colored with large wings and long talons. It also has a flat face, large ears, and vampire fangs. In Mind Over Mutant, it is almost completely hairless from the neck down, with gangly arms and a hunched posture. Tattered wings run down its forearms, but are not visible in its resting state, extending only when running, fighting, gliding, or blocking. In the wild, Battler hangs from tree branches and stalactites, waiting to ambush foes. They prefer to fight in groups, flapping their arms wildly and shrieking as they attack.

Light Attack: Battler slashes an opponent with its right arm just once.

Glide/Heavy Attack: Battler swoops forward a few feet, damaging any titans it touches. In Crash of the Titans, the glide is Battler's heavy attack. In Mind Over Mutant, it is a combo done by performing a light attack while jumping, and no longer breaks an enemy's guard.

Uppercut/Heavy Attack: Exclusive to Mind Over Mutant. Battler lunges at an opponent and uppercuts it, breaking its guard. This attack can be charged for greater damage by holding the 'heavy attack' button.

Bat Slash Combo: Performed in this order: light-heavy-light. Battler swings at an opponent with each arm, then finishes it off with a pound. Taking damage may interrupt the combo.

Cyclone Storm: Battler whips its wings to create a gust of wind beneath itself, charging the cyclone. Once released, the cyclone barrels down enemies in its path, dividing itself if needed to hit multiple targets. These cyclones persist until their targets are stunned. This attack instantly consumes the full Titan Meter. If Battler is hit during the charging phase, the attack will be cancelled.

Block: Battler guards itself with its wings. It can also shuffle around while blocking. 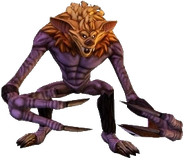 An unjacked Battler in Crash: Mind Over Mutant. 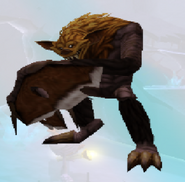 Promotional trading card of the Battler for Crash of the Titans.