Bandipedia
Register
Don't have an account?
Sign In
Advertisement
in: Crash Bandicoot, Crash Bandicoot: The Wrath of Cortex, Crash Twinsanity,
and 9 more
English

Bat
Bats are usually enemies in the Crash Bandicoot series.

In the levels The Lost City and Sunset Vista, swarms of bats may travel from right to left every few seconds, hurting Crash if they touch him. Two solitary bats hanging from the walls mark the points at which the swarms will appear and disappear. Defeating the second bat causes the swarms to stop spawning.

In Temple Ruins and Jaws of Darkness, in certain tunnels, bat swarms will periodically fly towards the camera. There is no way to stop them from spawning.

All bats can be defeated by spinning.

In Crash Bandicoot: The Wrath of Cortex, bats fly around in circles and hurt Crash if he touches them. They can be defeated by spinning them away. They appear in the level Wizards and Lizards. If Crash is killed by the Wizard Lab Assistant, he will turn into a bat as part of his death animation.

In Crash Bandicoot Purple: Ripto's Rampage, Crash rides a bat in the levels Bat Attack, Bats in the Belfry and Bat to the Future.

In Crash Twinsanity, white bats fly around aimlessly in Iceberg Lab and Ice Climb, but shriek and swoop down at Crash when he gets close. The red bats found in Boiler Room Doom fly from side to side over pits, but won't actively chase him.

Bats reprise their role in the remaster of the first Crash Bandicoot game.

Bats briefly appear on the track Nina's Nightmare. They fly above racers as they pass and cannot be interacted with in any way.

Enemy bats appear towards the end of Toxic Tunnels and also in Seeing Double, flying from side-to-side. Crash and Coco are able to kill bats with the spin, jump, or body slam attacks, while Cortex can only blockify them.

A Bat in Crash Bandicoot

A Bat in Crash Bandicoot 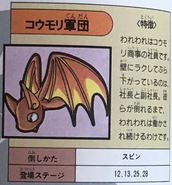 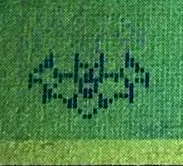 A bat in the Haunted Forest in Crash Bandicoot for the 99X.

A bat in the Condemned Mansion in Crash Bandicoot for the 99X.

Crash and a bat in The Wrath of Cortex

Concept art for the bats in Crash Twinsanity