Jumping, spinning
Bandifish[citation needed] are enemies appearing in Crash Bandicoot 3: Warped and the N. Sane Trilogy remaster of the third game. They are only found in the prehistoric level Dino Might!, hopping around in the water and blocking the path.

This fish has Crash's head, is orange colored and has a blue tail resembling Crash's pants, and it can also spin like Crash does. With the prehistoric setting, this likely implies that this is an early ancestor to Crash himself that has not evolved yet. The concept art claims that they are indeed a prehistoric Crash, as it is written "Prehistoric Crash" next to them.

If Crash or Coco get hit by a Bandifish, the fish will drag them under the water, possibly eating them. However, if Crash or Coco touch a Bandifish while both are spinning, they will be flung away from it with no damage.

When encountering these enemies while performing the time trial, it's best to slide jump over them and quickly execute the Death Tornado Spin to avoid them, as waiting for the right timing to jump on them can waste a lot of time.

A Bandifish from Crash Bandicoot 3: Warped. 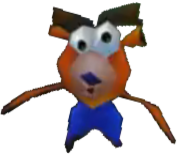 A sketch of the Bandifish.

Retrieved from "https://crashbandicoot.fandom.com/wiki/Bandifish?oldid=189008"
Community content is available under CC-BY-SA unless otherwise noted.